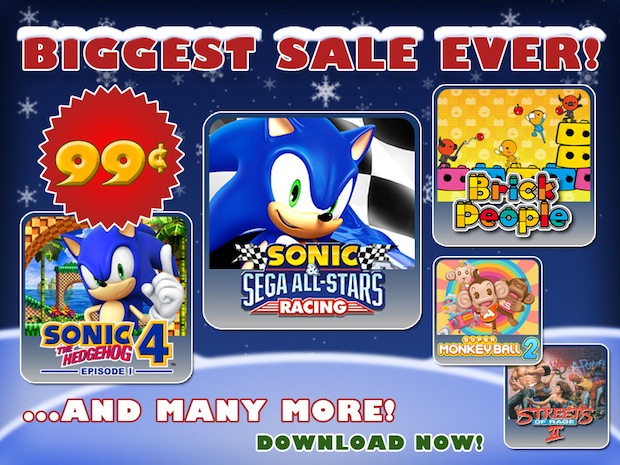 Here comes the sales when you’re fresh out of money from holiday shopping. It never ends! At least Sega is offering some pretty low prices on some of these XBLA, PSN and App Store games. Some of them are 80 percent off. You’ll have to get into each store and dig around to find the deals, but sorting/searching for “Sega” shouldn’t be too hard.

The Microsoft offerings are probably the most limited. Sega lists Renegade Ops for 800 Microsoft Points and After Burner Climax for 400 MSP, but that’s about it. They say these prices are good from tomorrow through January 2.

Sega’s discounts on PSN run from tomorrow through January 3, and include games like Daytona USA for $6.99, or Sonic the Hedgehog 4 Episode I for the same price. Renegade Ops and Sega Rally are also discounted.

Finally, the iOS sale runs through January 9, and has many of Sega’s offerings priced at $0.99. Chu Chu Rocket HD, Streets of Rage 2, Sonic Spinball, Brick People HD and many more are only going to cost you a buck.

Hopefully you still have a few bucks left!