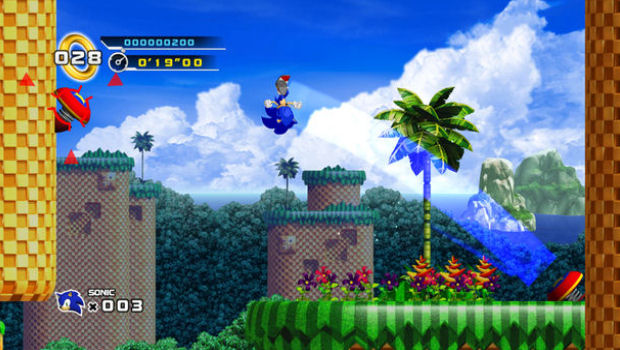 I had an opportunity to talk to Sonic 4 brand manager Ken Balough while on the E3 showfloor, discussing the history of the game, the intentions of Sega, and the reaction from fans. On that last point, I was curious as to how the infamous Sonic 4 leaks and the fan fury that followed affected Sega, and what influence that has had on the game’s development.

“It’s unfortunate that such an early build of Sonic 4 was made more public than we liked,” explains Balough. “We do want fan feedback and part of the extended development is to incorporate a lot of the feedback we’ve gotten. We do want to hear it a lot, but we want to hear the right feedback. A lot of fans saw a build that was so early on that we’ve moved well beyond it. It’s sort of like giving feedback on a concept car instead of the actual prototype, so while some of the criticism was relevant, a lot of it wasn’t anymore, which is unfortunate because we want to hear what fans have to say.”

And what of the infamous “mine cart” controversy which turned off many fans? How did Sega deal with the footage of Sonic flailing around in a bad tilt-controlled cart?: “Yeah it’s a shame such an early concept was viewed upon when the reality is that the game we have today is very different from that. My job as brand manager is to communicate with the consumer, letting them know how we react to this feedback. We took it very seriously that our build had been stolen and took measures with first party to ensure that it doesn’t happen again, but more than anything we want to lay to rest fan concerns that the game isn’t polished or doesn’t have what it needs and I think a big part of that message was extending the development and making sure that fans feel like they’ve been heard because they have been.”

During my time with Sonic 4, I did ask an unknown Sega rep if part of the development extension was based on dealing with the mine cart. He simply smiled and nodded. Rest assured, Sega knows you hated that bloody cart.