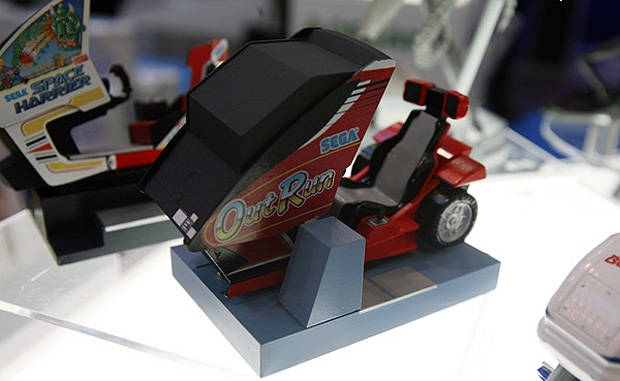 In the golden years of arcade gaming, Sega ruled the school with their sit down coin-op arcade machines. Now, any tiny people living in your walls can relive the glory days with Kaiyodo‘s Taikan Game Collection. The set features 4″ models of Space Harrier, Hang On, Out Run, and Thunder Blade, as well as a “mystery game” that turned out to be After Burner.

The models are made of PVC and come in a set of six—looks like you’ll be getting a duplicate, which would make a great stocking stuffer when the collection ships in December. (Or you could just keep it for yourself since they’re awesome.) In the meantime, you can check out more photos at Hobby Media, and pre-order the collection at NCSX for $48.90. At less than $10 a pop, that’s not a bad deal.

Interesting sidenote: After Burner, Hang On, Out Run, and Space Harrier were all designed by Yu Suzuki, who would later go on to create Virtua Fighter and the cult favorite Shenmue series. Word is that Suzuki is still busy making racing titles for Sega, and, in case you’d rather play it than look at it, OutRun Online Arcade is available on Xbox Live Arcade and PlayStation Network.