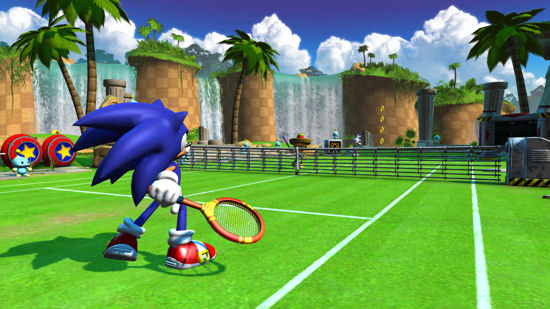 Sonic has definitely been hanging around with Mario for too long. Much like the fat plumber’s own brand of tennis games, Sega has announced a racket-based adventure of its own — Sega Superstars Tennis. That’s right, it’s a game I’m willing to bet that 90% of us don’t ever play in real life … but now it has Sonic in!

As well as the notorious hedgehog, other announced characters are AiAi from Super Monkeyball, Ulala from Space Channel 5 and Amigo from Samba De Amigo. The final roster will include fifteen characters in total. Dear God let one of them be the dwarf from Golden Axe. Sega Superstars Tennis will be released on the PS3, PS2, Xbox 360, Wii and DS platforms.

The jaded cynic in me wants to mock, but the nostalgic child buried deep in my soul (not the one buried in my yard) is hoping this actually turns out well. Just like Mario Kart and Crash Team Racing makes me interested in racing games, could Sega Superstars be a tennis game worthy of a ‘hardcore’ gamer’s purchase?

I will keep an eye on this one, as I’m sure many of you will. If it turns out rubbish, nothing lost, but if it actually succeeds, then nobody’s going to complain. This is Sega we’re talking about though, so let’s be careful before anybody gets excited. My advice to the developers is to think carefully about that Dwarf from Golden Axe. He could be the deciding factor between failure and victory for this new title!