We’ve complained in the past about Sega’s confusing marketing for Sonic Colors, with several claims that the game is designed entirely for kids, while Sonic 4 is designed for older fans. When I asked Sega why we were being discouraged from playing Colors, which looks excellent, Sega of America wanted to clear the air and state for the record that we older fans are allowed to enjoy the game.

“Sonic Colors is for everyone! Let’s say that right out of the gate,” says Sonic senior brand manager Judy Gilbertson. “But to clarify further, we definitely don’t want to isolate any of our fan base — we’re absolutely thrilled to see the positive reaction Sonic Colors has gotten from fans and the excitement in the community about its upcoming release on Wii and Nintendo DS.

“Obviously, everyone at SEGA has a deep-rooted love for the Sonic franchise, and we’re always working on bringing new and exciting Sonic experiences to our fans. This year, we have three very different but equally great Sonic titles coming out; each with their own unique design philosophies and approaches to gameplay and all of which are created for Sonic fans and gamers, both those new to the franchise as well as those who have followed these games from the very beginning.” 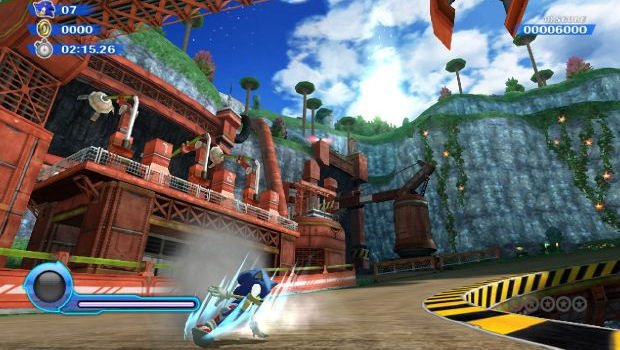 “With Sonic Colors, we’re looking to deliver a fast and fun Sonic experience that blends both 2D and 3D game mechanics in a way that a lot of fans have desired for some time,” Gilbertson adds. “But we’re also looking to create a game that is accessible to younger gamers as well as our ‘core’ fans.

“In short, Sonic Colors is designed first and foremost to be fun; the emphasis is still on everything that makes Sonic great, so there will be things there that will please long time fans in addition to elements in the game designed  to bring in new Sonic fans as well. We expect that all of these aspects of gameplay will result in an experience that gamers of all ages will truly enjoy. And the game is a great compliment to both Sonic 4, a title that focuses on that retro style of gameplay and is also being released later this year as the first true sequel to the SEGA Genesis line of games, and Sonic Free Riders, which is the first game of its kind on Kinect this fall.

“Sonic fans continue to be vocal and supportive of their favorite franchise and we’re very aware of, and appreciate, that loyalty and dedication. In short, there’s something for everyone in our Sonic line up this year.”

So there you go. Whatever’s coming out of Japan, Sega of America’s official stance is that Sonic Colors has is intended for everyone, even creepy old men like us who really should stop thinking about big-eyed blue hedgehogs! It’s a good thing, too, since Colors may very well be a terrific game and I’d hate to not be allowed to play it.