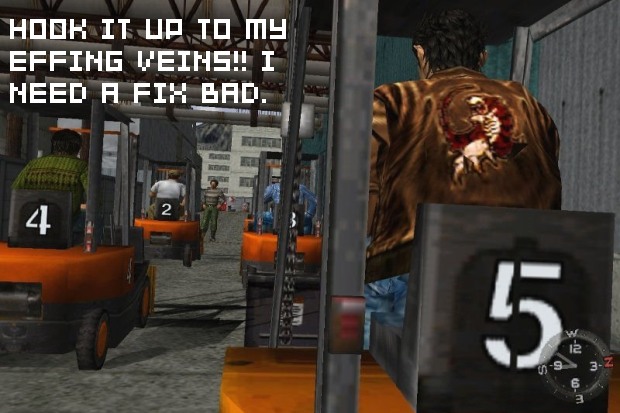 Yesterday I mentioned that I would kill for a new Battletoads game, which I would, but it leaves me in a bit of a pickle as I’m not sure how to explain how badly I want a third Shenmue game. Saying I would cause a nuclear holocaust seems like a bit of an understatement as well, and I’m not sure how I can go beyond that. The point being is that I want it bad. The trilogy has to finish, and I don’t care how poorly it sells. It seems SEGA doesn’t either, as they’re as desperate to finish their opus as I am to play it.

According to a site in a different language, in a recent issue of the 360 dedicated Famitsu the game was discussed and the sum of it was this: “None of the previous games sold really well for the investment made, and SEGA is in doubt as to if it will resurrect the series. However, SEGA assured the fans that if there is some opportunity to revisit the series, they would love to do it.

“SEGA also mentioned the chance of one of the three hardware makers financing the game’s (Shenmue III) production in exchange for an exclusivity deal.”

I know I’m just getting my forklift driving fanboy hopes up since I’m pretty sure there is almost no money in making the game and thus it won’t get done, but I can’t help it. SEGA and Nintendo have been awfully chummy these past years and Nintendo definitely has the money to fund a very risky project. While I’d love to see Shenmue in high def, the game could rock on the Wii with the right controls and the random mini-games would be right at home.

Filed under... #DO WANT#Sega#sequel#Shenmue#Top Stories