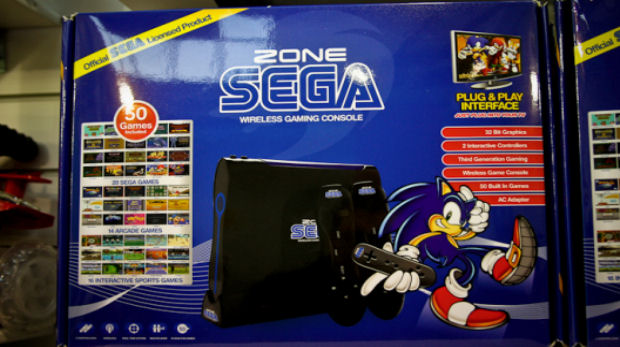 That’s right. Sega hasn’t had a real console since the deceased Dreamcast, but here we are in 2010 and the company has stormed back into the console wars with a worthy rival to Nintendo’s dominating Wii system. Well, not really, but it is a home console (in a way) and it does have motion control (after a fashion).

The Sega Zone Wireless Gaming Console is one of those silly retro all-in-one deals, packed as it is with twenty classic Genesis titles including Sonic the Hedgehog, Alex Kidd and Golden Axe. The interesting thing to note is that an additional thirty games are new, and sixteen of those are motion-controlled with the two packed-in remotes.

To be fair, the games sound a bit rubbish. Just a bunch of sports games like golf, tennis and darts. Basically. Sega made one of those cheap plug-and-play systems, but tossed in a Wii rip-off while it was doing so. You can’t even load new games into thing. Worth fifty quid? You decide.