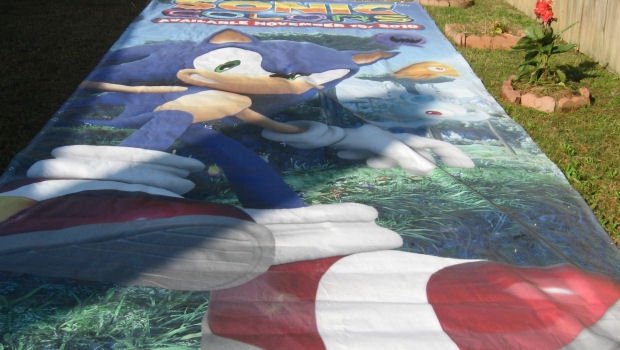 I received a massive, heavy package from Sega earlier today. Since I wasn’t expecting anything and the last Sega-related thing I’d written was the notorious Sonic Colors review, I must admit I was worried. Appears I had every right to be.

The reason these photographs were taken outside is that I could not open this fully anywhere within the confines of my house. For a sense of scale, I’m 6’2″, and yet if I laid down next to this image, I would only just about be tall enough to lick Sonic’s little furry balls. You ever been to a convention and seen those giant canvas banners hanging from the wall? Yeah … now I have one in my rain-soaked back garden.

For the record, I have a very short list of suspects who would have orchestrated this, and as soon as I work out what the Hell I’m going to DO with this thing, I will start working out how to get you f*ckers back.

Still, at least Sega has a better sense of humor about reviews than most Sonic fans.