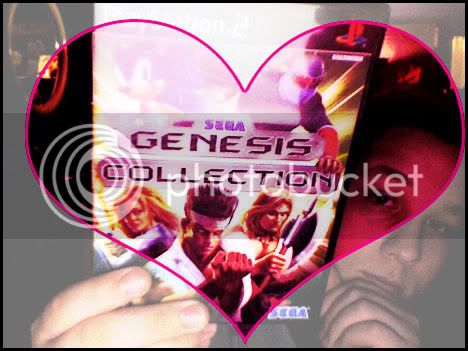 As a child, I had the SEGA Genesis. My brother and sister took the NES and SNES for themselves (and later sold it. I will never forgive you, Ricky!), and as a spoiled little bastard I demanded that SEGA Genesis. That enchanting blue hedgehog enamored me in so many ways, it would not be an overstatement to say that I may have “wubbed” him. Not Nex and Summa love, just puppy love. Or hedgehog love. You get what I’m saying.

I still play Sonic from time to time, and I still enjoy it, Sonic The Hedgehog 2 being my favorite. When I heard about SEGA Genesis Collection, I was quite a happy camper. Albeit, I do not camp. As a matter of fact, I hate camping. I contemplated throwing bird seed on the PS3 campers around here. But I digress, I was a damn happy camper. What do I think after I’ve played it? You may find out after the break.

(A question with an incentive to read the rest of the article? Someone stop me, I’m too good.)

SEGA Genesis Collection has a crap ton of games. 28 are available to you from the start, with a few unlockables, such as Tac/Scan, a game from 1982 that is damn weird. It’s essentially a space shooter, but it’s really unpolished. More interesting than fun. But besides the unpolished games, we have the original 28 that were on the Genesis, that SEGA has hand picked for the collection. Of course, some games are great while some games suck, but hey, what’d you expect? It’s only 20 dollars either way, you can’t really go wrong.

The interface from which you pick the games is really nice, as well. All of the starting 28 games come with a history, a few tips, and the original cover art. The history is my favorite part, with a “Did You Know?” section that I find interesting and occasionally humorous. From Phantasy Star IV:

“When Phantasy Star IV was first released, the retail price was almost $100. Think about how much this collection cost. You’re welcome.”

But, really, who gives a damn about the insane amount of extras? The unlockable games and interviews, the sexy new trailers, the mystical “SEGA Cheat Sheet”. We’re here to talk about the games. And so it shall be done.

As I scroll down the list, a few games pop out at me. Altered Beast, Columns, Comix Zone, Golden Axe I-III, Phantasy Star II-IV, Ristar, Sonic the Hedgehog as well as Sonic the Hedgehog 2, and Vectorman, along with its sequel. Among those listed, I’ve played 5 or so, thus I immediately fired up the games that I’d heard much about. One of those games was Ristar.

I wasn’t sure if anything could stop me from playing Final Fantasy XII. Then I met Ristar, the little star with stretchy arms. The environment in this game is similar to that of Toe Jam & Earl, with an alien feel and a colorful world. Even if it didn’t have the graphical awesomeness, it would still kick ass due to its excellent gameplay. Essentially, you hump people into submission. You grab them, and “headbutt,” them. Due to Ristar’s odd complexion, his head is his body. Hence, humping enemies to death. Double points for Ristar; since sodomy is a sin, his enemies are now burning in hell like they should be (Thanks for the tip, s8n.).

God, Ristar is a badass. Look at him:

You should just buy this game for Ristar alone. Of course, there are a number of other awesome games too, such as Columns. I have a vague memory of Columns, as I do with many SEGA games, considering I had SEGA Channel. It’s the Tetris of the Sega Genesis, though infinitely more hectic and way, way more Phoenician. I’ve also poured a lot of time into Comix Zone, which is an awesomely unique concept. Essentially, you’re inside of a comic and you have to beat the crap out of the creatures that you created. Always a fun game, and with the save feature in SEGA Genesis Collection, pretty easy.

Those three titles stick out in my head as the best ones, besides Sonic The Hedgehog 2. Having tried out every game, I can assure you that there are more good games than bad. But then there are games like Bonanza Bros. God what a f*cking monstrosity that is. I’d rather saw off my fingers than play that game again. That was an exaggeration. I’d rather saw off my fingers than ever look at that game again.

Honestly, I think the collection could have used a few more games. By that, I mean, drop Bonanza Bros. and throw in Bubsy. Am I the only one who loved that game? And where’s Boogerman? Earthworm Jim? Road Rash? Not sure on the whole licensing aspect, but these games really define my time with the Genesis. Maybe next time, SEGA.

All in all, SEGA Genesis Collection is pretty darn sweet. It’ll provide you with at least a few hours of entertainment. Hell, Golden Axe I-III will waste a day or two of your time. As I said previously, you can’t go wrong for 20 bucks. Unless, of course, you’re buying ICO. BURN!