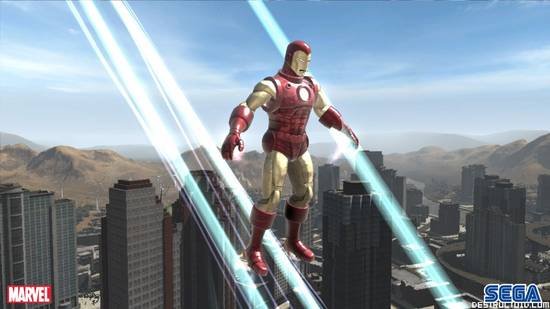 We are only weeks away from the release of Sega’s Iron Man game, set to hit shelves on May 2 to coincide with the release of the film. Sega has released a new batch of in-game screens, with most of them detailing the various suits Tony Stark can step in and out of throughout the course of the game.

Some are obvious, like the classic armor that Iron Man wore when he made his debut in Marvel’s Tales of Suspense issue #48. Others are more surprising, like the “Hulkbuster” suit, designed specifically to take out that pesky Incredible Hulk. Does this hint at seeing the Hulk in the game? Hmmm … Also shown are the fancy console exclusive suits, the Silver Centurian (Xbox 360) and the Ultimate (PlayStation 3).

If Hollywood is afraid that Grand Theft Auto IV will impact ticket sales for the Iron Man movie, what do they think of Sega’s game? Will they cannibalize each other’s sales? Maybe people will be so confused that they’ll neither see the move nor purchase the game, and both Sega and Paramount Pictures will go bankrupt! Don’t quote me on that.