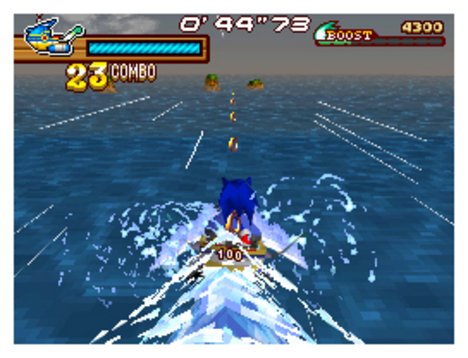 Did I or did I not tell you that some new Sonic game was coming out for some system? Eh?

Today, Sega has annouced Sonic Rush Adventure for the Nintendo DS, the sequel to what happened to be a gem amongst piles of Sonic-smelling turds, Sonic Rush.

Adventure maintains all of the classic Sonic 2D goodness from the original Rush, along with an awesome plot twist involving pirates and a robotic triceratops. Sonic and his furry buddies will also sail the seas in 3D, using a fleet of up to five ships (including a water bike and submarine) to race across oceans, perform tricks, and engage in ship-to-ship battles that end in flaming pirate ships and lots of dead things.

These levels (which have the potential to ruin a solid 2D experience) are complimented by 3D boss battles that span both screens. Wild!

The game’s villian, Captain Whiskers, doesn’t stand a chance once Sonic fans get a hold of a stylus and utilize all of Nintendo DS’ unique touch screen capabilities to deal massive damage across the high seas. Argh!

Sequel to Critically-Acclaimed Sonic Rush is now in Development

Sonic returns to the Nintendo DS in an all-new frantic adventure complete with dizzying dives, near vertical curves and brain twisting loops. Sonic Rush Adventure will retain the DS action that fans loved so much from Sonic Rush™, as well as providing a new high seas adventure where Sonic clashes with ruthless pirates. Players will set off from Windmill Village as Sonic and blast their way through seven action-packed and widely diverse levels. Sonic Rush Adventure will make full use of the DS Download Play feature and Nintendo Wi-Fi Connection, which enables gamers to compete with friends in wireless racing and mission-based battles.

Guide Sonic through numerous action stages in the fast and furious single player mode, whilst collecting valuable items and materials that enable Sonic and Tails to track down the villainous pirates. With a fleet of up to five ships, including a submarine, water bike and hovercraft, Sonic Rush Adventure uses the Touch Screen technology in exciting new ways. Use the Nintendo DS Stylus to help control vessels as they race across the ocean gathering rings, performing tricks, and torching pirate boats, whilst engaging in fierce ship-to-ship battles. At the end of each level, epic 3D boss battles spanning both screens will test gamers skills to result in an ultimate showdown with the evil boss character, Captain Whisker.

Sonic Rush Adventure allows players to bounce, fly, swing, ride and run through grand environments of lush forests, an ominous ghost ship, snow covered mountains, pirate villages and a vast underwater sea cave. Along the way there will be a variety of enemy characters to battle against including robots, skeleton warriors, pterodactyls, and a robotic triceratops.