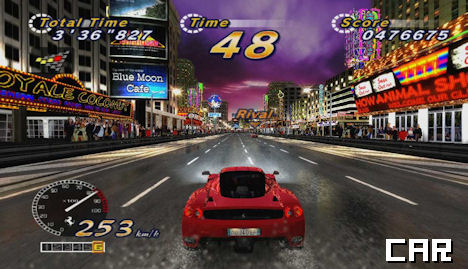 Sega’s classic OutRun franchise is getting an online kick up the arse with OutRun Online Arcade, coming to Xbox Live and the PlayStation Network in early 2009. As well as brand new hi-def visuals, OutRun Online Arcade promises six-person multiplayer to accompany its 15 courses. The game is developed by Sumo Digital.

While I am pretty interested in seeing OutRun Online Arcade, the nostalgia whore in me would have loved to have seen the original eighties game getting an online reboot. Later games just look like any other racer. The original had charm. Ah well, c’est la vie.

Test your time, speed and handling ability as you race through vibrant, colourful stages and rediscover the 15 glorious OutRun courses.  From the steep streets of San Francisco to the beautiful beaches of California, it’s mile after mile of unrelenting acceleration, thrills and action.  Feel the kick as you put your foot to the floor in one of the 10 high-performance, fully licensed Ferrari cars as you race your way across the U.S. to a killer soundtrack.

For the first time on PlayStation® Network and Xbox LIVE®, OutRun Online Arcade delivers online multiplayer racing for up to 6 players, with fast paced OutRun, Heart Attack and Time Attack modes, the draw to the open road has never been so appealing.  OutRun Online Arcade on Xbox LIVE® will feature achievements and voice; and on PlayStation® Network will include trophies, voice over IP and leaderboards.

Which route will you choose on your drive for the highest possible score?