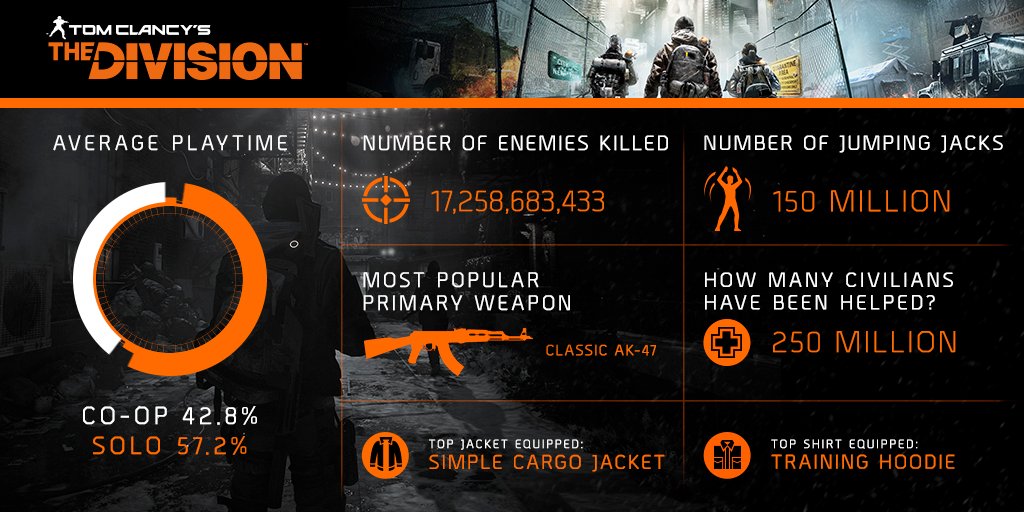 I love it when companies share things like this. Ubisoft shared the infographic above to illustrate how much has happened in the 30-some days since The Division‘s release. In just once month, players have killed more than 17 billion enemies. According to the scholarly Google search I just did, that’s more than twice the population of the entire planet. Seriously, that’s a lot of bad guys hanging around Manhattan.

On the more realistic side of things, it’s nice to see that wardrobe staples like the simple cargo jacket won’t go out of style, even when the world is ending. But it is more than a little surprising that, despite encouraging players to team up to complete missions and explore the Dark Zone, more than half of overall gameplay time in The Division has seen agents riding solo.

The multiplayer experience seemed to be one of the big selling points; I would have expected those percentages to be flip-flopped. Hopefully Ubisoft keeps publishing data like this too. It’ll be interesting to see how those numbers change as new content like tomorrow’s Incursions patch appears.

Incursions, by the way, is the first major content update hitting The Division, and only one of many paid and free updates the game will see throughout 2016. The full nitty-gritty on the patch has been up for some time now, but a new trailer released today takes a closer look at the upcoming Falcon Lost incursion, which is arguably the most exciting part of the update. If you’re not at level 30 yet, time to stop dragging your feet. Seems like the raid is the only way to get some of the new gear sets and exotic weapons added with the update.

While I haven’t picked up The Division yet, I probably will at some point. The game wasn’t quite the Destiny killer is was prophesied to be, but it still managed to steal a few of my Fireteam buddies away from me and I miss playing games with them. I’m not bitter, I swear. If anything, I’m jealous of all the content hitting the game this year. Aside from tomorrow’s patch, players can expect one more free update this year, in addition to three upcoming paid expansions. I’m starting to miss the days when Destiny treated players that well.