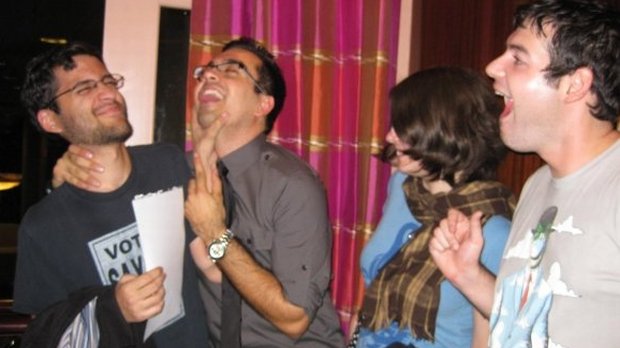 I don’t like goodbye posts, generally. I can’t count how many obviously insincere farewell posts I’ve read on innumerable blogs, where people whine and cry about missing the community and the people and the fun while silently thanking their lucky stars that they never have to talk to any of those people again.

I won’t blame you for fearing that this post will be no different.

To me, however, Destructoid has been everything. I’m leaving the site for a writing gig at Gearbox Software, but I would have never gotten that job, or any other I’ve held in the past three years (Blockbuster Video notwithstanding) without Destructoid.

Long story long can be found after the jump.

I am being one hundred percent honest when I say that everything in my life that I consider valuable or spectacular has come about, directly or indirectly, because of Destructoid. I often have brief moments of existential terror when I start wondering what my life would be like if I hadn’t decided to write an (in retrospect, not terribly great) editorial about Shadow of the Colossus in the Dtoid forums when the site was still small, prompting Niero to hire me for the frontpage.

Before I went into the interview at Gearbox, I told Ashley Davis: you know, it’s not really a big deal if they don’t hire me. I mean, I’d love to go work on games — I’ve wanted that since childhood — but living here with you, and blogging, and doing Hey Ash, and playing and discussing games for a living? That’s a pretty goddamn great life. Even if Randy Pitchford punches me in the stomach and sends me home without another word, I told her, I’ll still be coming home to a life I absolutely adore.

And all that is thanks to Niero, and everyone else at Destructoid. I cannot possibly understate the positive change that Destructoid has made to my life.

I also can’t understate that — a few douchebags notwithstanding — the community has been great to me. Hanging out with many of you at PAX, or hearing all the helpful and often kind things you’ve had to say about HAWP, or the Rev Rants, or the editorials, made my time at Dtoid that much better. Don’t get me wrong: some of y’all are fuckers, and there’s no getting around that. But Obligatory Internet Fucker Count aside, I couldn’t have asked for a more supportive, cool group of readers to pitch my content to every week.

I’ll miss the site, and the people, and the life that Destructoid gave me. I’ll miss it all, in one way or another. But I’ll be leaving all that for a job and a lifestyle so far beyond anything I could have ever imagined before joining Destructoid, so incredibly cool and terrifying and wonderful and epic, that I have only one thing to say to the founders, staff, and community of Destructoid:

Also, on an unrelated note:

Ashley Davis, will you marry me?