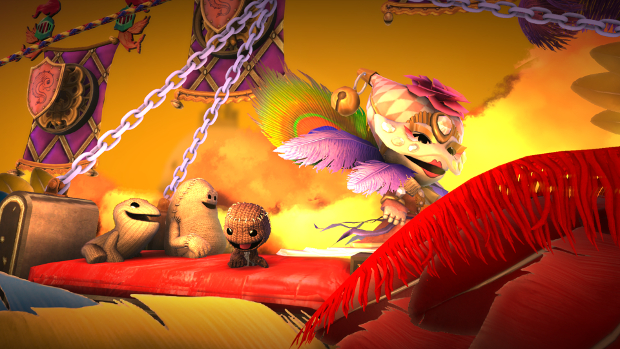 After the runaway success of the first two LittleBigPlanet titles on PS3, fans had been clamoring for a follow-up on Sony’s new hardware. With the announcement of LittleBigPlanet 3 at E3 coming to both PS4 and PS3, the LBP community got just what they wanted and much more.

We got the chance to check out some new stages that utilize new physics and new playable characters, OddSock, Swoop, and Toggle. Speaking with producer Daimion Pinnock, the creative minds behind the game are excited to see what what the community has in store for the LBP 3.

“LittleBigPlanet was one of the first games that incorporated user-generated content,” said senior producer Daimion Pinnock. “With LittleBigPlanet 3, we’ve taken things to a whole other level in regards to the robustness of what you’re able to do with the levels and design. There’s a lot more depth you create, which adds a whole new element to the gameplay.”

With the inclusion of four playable characters, dynamic weather, enhanced physics, and the ability to play on all past LBP levels with enhanced visuals, Sony is hoping that the community will go nuts and create even more levels that will push the limits of what LittleBigPlanet is capable of.