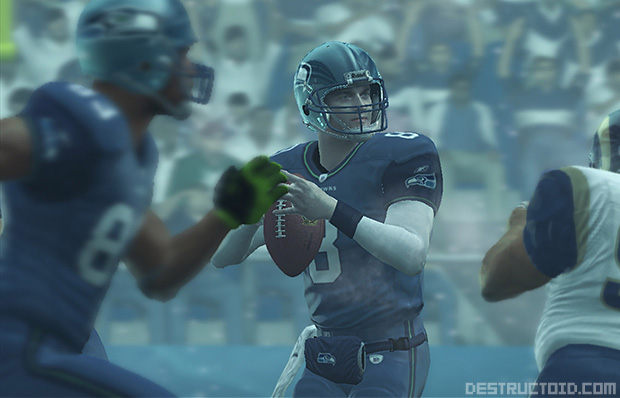 As I’ve mentioned before, this year, EA Sports has been much more willing to divulge details on the latest iteration of its venerated Madden NFL franchise, and at a much earlier point than ever before. Last Friday, Lead Designer discussed a major new Madden NFL 10 feature on the Inside EA Sports blog, “Adaptive AI,” which aims to eliminate so-called “money plays” and other exploits.

That same day, the development team flew out “eight of the most hardcore Madden fans” from Operation Sports, a popular sports gaming community site, to EA Tiburon in Orlando for the earliest Community Day that EA has ever held (for perspective, last year’s event was on May 30th). Since there’s still plenty of time in the development cycle, the team will be able to make use of the feedback garnered from the event and implement it into the game.

After such a significant reveal four days ago, Cummings decided to simply post a recap of the Community Day yesterday, along with a treat — the second screenshot of Madden NFL 10. Posted with the caveats that “lighting and skin tone tuning [are] still in progress,” the image shows off Seattle Seahawks quarterback Matt Hasselbeck in the pocket, and for the first time in Madden history, he’s got a hand warmer. (A full-size version of the screenshot is available in the gallery below.)

The voracious hardcore Madden fans went to town analyzing the first screenshot for upgrades and additions; what stands out to you guys in this image? Boy, August 14th just can’t come soon enough…