As manager of community development for Harmonix Music Systems, Sean Baptiste was living the life of his dreams, and one that would make any gamer jealous.

Working for the Boston-based studio since 2004, Baptiste was present for the launch of the game-changing Guitar Hero franchise. Over the years, he’s built strong relationships with amazing fans and gamers by being not only approachable, but extremely likable. He’s also played Rock Band with legendary jazz musician Herbie Hancock.

And then in 2009, a medical procedure as a result of a long-standing brain tumor changed everything. Deciding to make the best of his situation, Baptiste looked to his childhood dream jobs. Working with a documentary film crew, he’ll challenge himself in a series of shows they’re calling When I Grow Up.

The first episode, which sees Baptiste trying his hand at stand-up comedy, will makes its premiere at PAX East on Sunday, March 13.

“My memory is kind of broken,” explains Baptiste of a series of neurological conditions that came as a result of multiple head-invasive surgeries. “I have a lot of difficulty creating new memories and recalling old ones and it rarely comes naturally.”

During conversations, he’ll have to actively work to bring up memories of who he’s talking to, including their relationship and previous experiences, simply to have context. Sometimes that overloads his brain, he says, and he goes into a “negative space” where things are happening around him, but he can’t process it. He calls this “White Noise.” 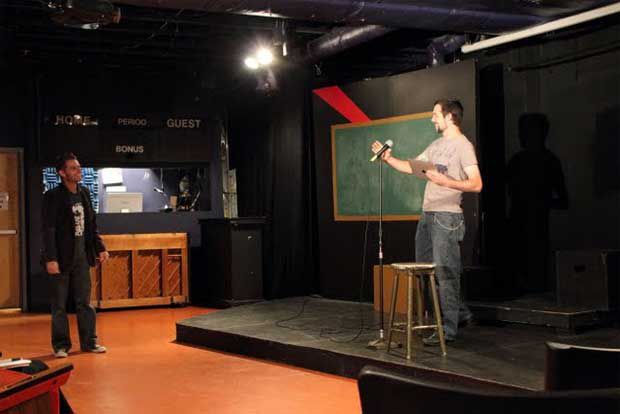 The idea that would eventually become When I Grow Up came to him, surprisingly, immediately following his last major surgery.

“The plan to do the show was full-formed when I woke up,” he explains. “I told some people about it because it was so full-formed and vivid, and it seemed cool.”

Cool enough to get the attention of Baptiste’s friend, director Trevor Chamberlain, who wanted to take on the project himself. The first challenge was stand-up comedy.

“[It’s] been a lifelong love of mine,” he says of stand-up. “When I was a kid, I listened to [Bill] Cosby and [Richard] Pryor. When I got older, I graduated to Bill Hicks, David Cross, Patton Oswalt, and Maria Bamford.”

Half jokingly, Baptiste says it’s unclear if with all of his brain problems, he can board a plane and not have his “skull pop like one of the dudes of Scanners.” And with Boston’s long history with stand-up, keeping it local seemed like a good idea.

How his stint with stand-up pans out will be revealed at PAX East, when the premiere episode of When I Grow Up will be screened during a panel on Sunday, March 13 at 12:00pm in the Wyvern Theater. 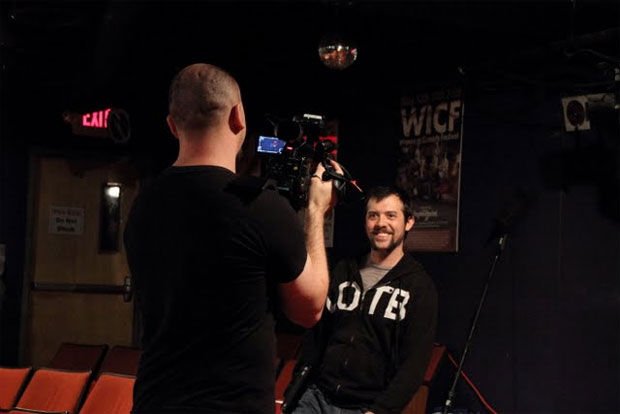 “PAX is my favorite event of the year hands down,” he says, explaining why he chose the venue for the show’s premiere. “When I was working at the shows, it always felt like a big reunion of friends — friends in the industry, friends who were fans, performers and panelists. Almost nothing made me happier.”

While When I Grow Up isn’t directly related to games, he says it ultimately felt right because “everyone there is just like us.” (“Except hopefully without brain tumors,” he quips.)

“We’re game fans, from videogames to tabletops, and we wanted to show it our friends first,” he says.

How his experiment with stand-up “with his brain tumor along for the ride” pans out is something you’ll have to wait and see for yourself. He will admit that it’s tougher than it looks, even with experienced stand-up coach Dana Jay Bein helping him along: “If anyone thought that comedians just sit around, think up a joke, write it down on a napkin, and then get on stage and deliver it perfect the first time, they’d be wrong.”

But it’s not entirely about success, as much as it is about challenging his brain. Baptiste’s doctor agrees that these challenges are great rehabilitative exercises, helping to strengthen weak parts of his brain. With some lofty ambitions on the to-do list — astronaut, rapper, and even a spy — failure is not only an option, but it’s expected, and that’s okay with Baptiste.

“I expect some jobs I will succeed at and some I will fail quite embarrassingly at,” Baptiste explains. “For my part, I’m just happy I’ve tried something that should impossible for me. Even if I fail, at least I didn’t just sit on my ass and sulk about my problems.”

“I also hope this lifts people up a little bit,” he continues. “The world kind of sucks right now. Showing people that no matter what has happened to them and that they aren’t powerless and can still try amazing things is something we need to be showing more.”