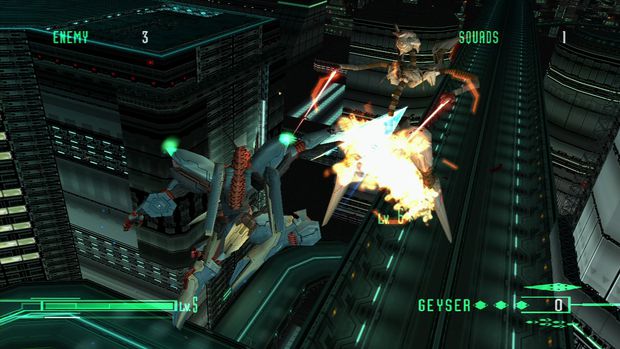 I screamed for joy the day Konami finally announced an HD re-release of the Zone of the Enders games. I love anything with mechs, and nothing even comes close to the fast paced nature of ZoE. Konami is showing it off at San Diego Comic-Con where I went hands-on, and both games look fantastic in HD.

The only downside to the collection is that the CG sequences in the first ZoE look horrible as it’s simply been upscaled. The visuals don’t stand the test of time, but that only applies to the movie sequences. ZoE: The 2nd Runner, however, won’t suffer the same issue as it uses anime visuals which still look great.

Of course, what really matters is the actual gameplay visuals, and they just shine. The textures on Jehuty and enemy units are so smooth and sleek, plus the HD effect adds a lot to the lights and bright colors throughout the game.

Screenshots like these don’t do the collection justice. As far as I’m concerned, Zone of the Enders fans won’t be disappointed.