Microsoft, along with Epic Games and Chair, had us over to give us a thorough walkthrough of Shadow Complex, showing us a build that is really close to finished. This makes sense, as we’re about three weeks away from launch. If you haven’t seen Shadow Complex, imagine a Metroidvania-type side-scrolling adventure created with the Unreal Engine, with a story and setting based on the novel Empire, by Orson Scott Card. This was the game everyone was talking about at E3, and now that we’ve seen a bit more, we can’t quit talking about it either.

Chair’s Donald Mustard was on hand to give us the full run-through on this fantastic looking title, set to launch in the middle of August, for 1200 Microsoft Points. It may be a bit early to call, but this looks like one of the best offerings out there for only $15.

We got to see the game from its very beginning, where we saw an intense action sequence that involved missiles and exploding helicopters and mayhem. Your character is insanely powerful, and seems to be handling himself in the middle of a gunfight rather well. Don’t get too attached, though, as this serves as a sort of tease to where you’ll eventually be in the game. For now, you’re whisked away to a grassy field near some caves where your character, Jason, is on a date with his girlfriend.  Your girlfriend, Claire, disappears, and soon this date turns into a search. During Jason’s search, he comes across a mysterious door in the cave, and soon has to take cover and hide from soldiers. It seems that these soldiers have taken our girlfriend away.

What’s interesting in the beginning of Shadow Complex is how you’re only able to run and jump. Later, during cave exploration, you’ll come across a backpack with climbing gear, allowing you to do more. After this, inside the area behind the door, you’ll gain weapons and abilities. Much like other games in this style, finding items adds onto your characters’ abilities.  You’ll begin as someone armed only with a flashlight, but will eventually end up as someone so insanely powerful that you can actually run on water. Jesus. 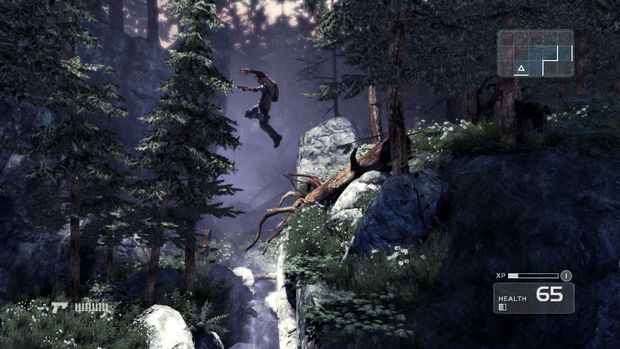 Behind the door? There’s a massive military complex which houses an extremist group that aims to collapse America into civil wars. Heavy. Jason comes to the conclusion that the only way he’ll survive in this complex is to steal weapons and items and use them for himself. And rather than run-and-gun like Contra, you’re encouraged to explore and make careful choices. It’s more about surviving and less about killing. We watched as Jason moved through corridors and air ducts, evading enemies and using surroundings for tactical advantage. While it may have Metroidvania roots, this game is a bit smarter than those older titles, and it makes this type of side-scroller fresh again.

Shadow Complex has an experience system. You get experience points for everything you do, from killing enemies to exploring. Every square of the map revealed gives experience, as does finding powerups. You’ll eventually gain levels and abilities, which in turn lets you explore further. There’s over 120 powerups to find in the game, which should keep you moving. We were also told about 12 hidden bars of gold. When all 12 are found, some special secret will be unlocked.

Shadow Complex is a great looking game. The setting is sleek and futuristic, and some of the lighting looks too good for a $15 game. It shines with polish, and Mustard credits the Unreal Engine for its looks and features. We were able to witness dynamic camerawork and closeups that manage to break up the side-scrolling action and keep things fresh.  We caught a glimpse of some great-looking underwater sections, too. This all led up to a boss battle with a giant robotic screen-hogging tarantula, which again looked awesome.

Impressive is the best word I have for Shadow Complex. This is a downloadable game to get excited about. Mustard tells us that there are 10-12 hours of gameplay on average, but that does not factor in acquiring all of the items and powerups, and does not count another game mode that gives players 21 time-based challenges to complete with weapons and abilities. We only saw a bit more than the first level, but for me, that was enough. I’m sold.