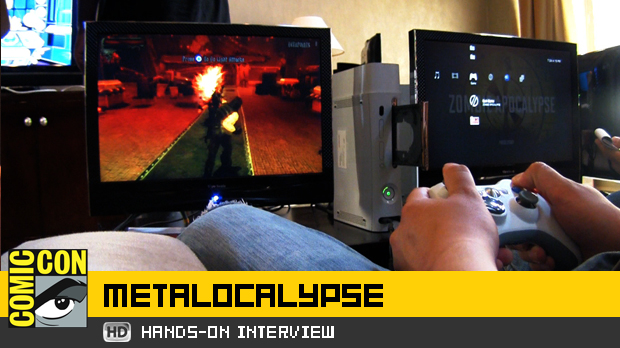 We got an early look at the impossibly metal Metalocalypse here at San Diego Comic-Con, where it is making its debut. Developer Frozen Codebase is busy readying the game for the PlayStation 3’s PSN and the Xbox 360’s Live Arcade, and their own Asa Dang showed us what it’s like to be a Dethklok roadie.

Metalocalypse is a 3D brawler that bears some resemblance to games like MadWorld. You’ll witness the blind devotion of Dethklok follwers as they go about killing themselves and others. When you die, the game tells you to “kill yourself more.” Of course, this game is based on the popular Adult Swim show about the insanely rich and clueless death metal band Dethklok, and the art, environments, and even voices have been pulled from that for this game. If you like the show, you’re going to love this.

It seems that gore for humor’s sake was the goal for this title, and there’s definitely plenty of gore here. Sure, you’ve got your standard head and limb ripping, but many of the finishing moves of this brawler take it over the top. There’s flaming body slams, various impalements, testicle ripping, face stomping, and plenty of urination, among others. Bodily fluids flow alongside blood.

Most of the game is spent ripping faces and kicking in crotches of these crazed roadies, but Dang tells us that other things like minigames will be revealed. He also told us to look for interactive music elements, though he did not go into specifics.

There’s nothing deep about Metalocalypse‘s gameplay. If you’re expecting anything more than waves of enemies waiting for your punches, you’d better look elsewhere. Attacks come from three strengths of attack buttons that normally let you kick and punch. Button combinations let you perform combos and special moves, and like other brawlers, various weapons can be used.

The difference here is that the game does not take itself too seriously. We were told that “funny gore” was the goal. If that’s the case, they’ve definitely succeeded. It’s hilarious in a totally wrong way, which was probably the point.

Look for Metalocalypse later this year. Konami tells us that they haven’t set a price yet, but they said they are aiming for something in the $10 range.