In Leedmees your body works as a bridge or walkway. In a strange world that you suddenly end up in, you appear as a flat, featureless being, and your sole duty is to guide little creatures called Leedmees from one planet to the next. While these Leedmees are cute, they’re about as stupid as Lemmings are, so you’ll need to pose so that your limbs (and more!) are positioned on-screen to act as a bridge from the starting planet (blue) to the goal planet (red). If you can guide the Leedmees to gather stars along the way, great. But they come fast and from every direction as the game progresses so you’ll be busy enough even without gathering stars.

The game starts you out easy. You’ll hold one arm up so that the end of it is about even with the starting point. All you really need to do from there is position your other arm so that the Leedmees can travel across both to end up at their goal. Each stage has a required number of Leedmees that you have to lead home. Move them too hard or accidentally step on them and they’ll disappear. Forever. Aww. 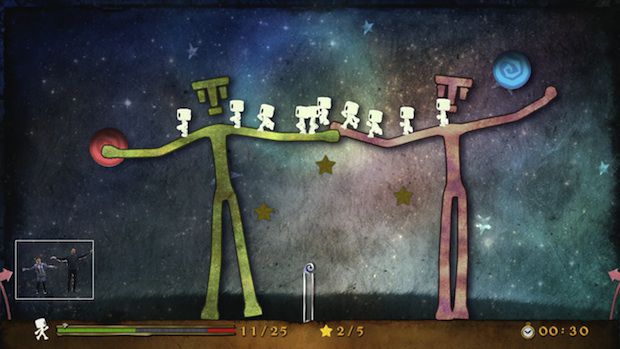 With later stages you’ll actually have to move around to guide these creatures, sometimes flipping them up in one place and catching them elsewhere to progress. The game throws challenges at you that makes the game increasingly difficult. For example, one stage forcez you to keep your feet planted, causing you to lean sharply to guide the Leedmees home. It eventually gets deep enough that you’ll find yourself in strange poses, squatting down with one leg sticking out or something equally silly. I was laughing hard at some of the poses people had to pull off when playing.

There’s also a two-player mode, and it’s pretty fun. One player will control the start point and the other will control the end point. What’s funny is that the start and goal are attached to different parts of the body. Players have to watch each other and coordinate their poses to save the little dudes from falling and being squashed by their own feet. It gets even funnier when you end up with your crotch as a goal. I’ll leave that one for you to think about.

Your movements are reflected with exact 1:1 control in Leedmees, which makes it one of the more satisfying Kinect experiences. Sure, the idea behind the game is pretty simple, but sometimes these simple ideas make for the best games. It’s a bit of Lemmings and a bit of Twister. In my book that’s a winning recipe.