I had the pleasure of speaking with Asura’s Wrath producer Kazuhiro Tsuchiya and CyberConnect2 president and CEO Hiroshi Matsuyama during San Diego Comic-Con this week. I wanted to know more about one of my top picks from this year’s E3 and these gentlemen were glad to share. They were even more happy to share when I told them that Asura’s Wrath was my game of show at E3. They smiled, thanked me in both languages, and told me that they’d tell me anything I wanted to know!

Destructoid: One of things I enjoy most about Asura’s Wrath is that it’s so over-the-top. To me it seems like you all got together to see how crazy you could make each situation.

When we were in development, the intention was definitely to go really over-the-top and go crazy with the game. We wanted to go to levels never achieved before in an action game. It’s hard to call Asura’s Wrath an action game. It’s more of a cinematic storytelling action game that we’ve broken up into scenes. It’s not a regular action game where you’d have a stage, and then you beat the stage to find a boss. There’s going to be a lot of surprises and unexpected happenings in the game.

How crazy does it get? Even in the demo, scaling up from close-range combat to a massive finger coming down from space to crush Asura, it seems like a ton of crazy was packed in. Where do you go from that? And I love that the game leaves you on this cliffhanger, with a “to be continued” tease tagged on. I wanted more!

Having you say that makes us very happy, as that’s exactly what we were going for. We wanted to give people that feeling like they were watching a really addicting television series, like 24 or Lost. That’s what we want players to feel when they’re playing the game.

It’s one thing to watch a TV show that airs once a week. Sticking you with a cliffhanger really leaves you wanting more, naturally. I feel like this game is going to be like getting a whole DVD boxset for me; I’ll want to watch them all at once!

That’s a good point. You could actually think of Asura’s Wrath as a DVD box of a series, all packed into one game. 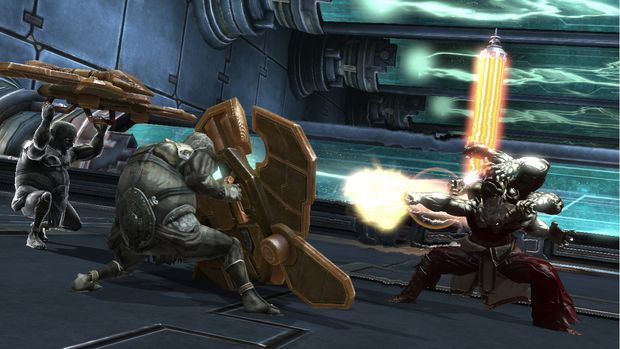 Is there really a limit to what Asura can do? It seems that he can always rise to the occasion, matching whatever amount of badass that is thrown at him.

I wouldn’t say that Asura reaches a limit in the game. I’ll say that there are different forms that he has. Actually, Asura looks strong, but he’s the one that is being beat up most of the time. His enemies are a lot stronger than he is. From the start he is the underdog in the story. What we want players to enjoy is that Asura is able to be the underdog and then use anger as his weapon and somehow in the end win. His anger from his wife being killed and his daughter being taken away is able to get him through this.

I’d love to know more about the influences. There’s clearly eastern influences, especially from mythology, but there’s also some strange stuff in there. Spaceships? Shooting? That’s really cool, but I’d love to know where that comes from and how that works in the story.

Asura’s Wrath has influences from mythology, science fiction and more. A lot of that is based on a lot of anime, sci-fi movies, manga we’ve read and more. None of this was used as reference for Asura’s Wrath. We tried to take was has been done before and not do that, making something completely new and original. That’s how we came about the style and setting.

Does the look itself play a role in the story? For example, are there ties to eastern mythology?

These themes, like Buddhism, mythology, and science fiction, don’t play that much of an important role in the game. This is the story of Asura and his anger. The themes are mainly a way to create a setting and there’s no specific role for the Buddhism or mythology. It’s not connected to the story, really. We just though this would be a cool world to work with.

How would you respond to gamers that say that Asura’s Wrath is just a bunch of Quick Time Events, implying that there’s a lack of gameplay.

Matsumaya: These comments, a lot of the critisms of Asura’s Wrath, that it’s all just QTEs, we think that a lot of these are just based on people just seeing videos, not having played the demo.

There are QTE events in the game but they’re not just QTEs, meaning that we’re not putting them into the game just to have them. We’re putting them in the game to get the player to connect more with Asura, to really become him. You’re really mimicking Asura’s actions with the controller. We want people to know that it’s not just QTEs. And we’ve only shown a small portion of the game so far. 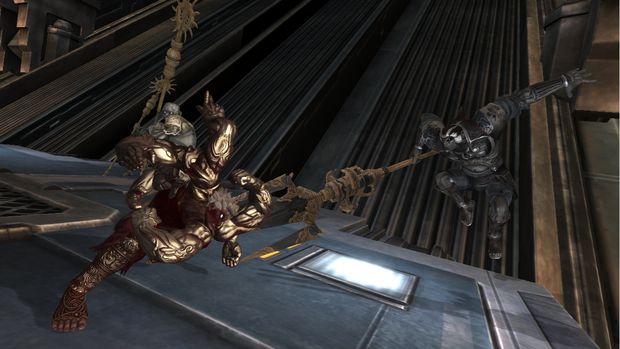 Is it fair to say that the majority of this game is closer to what I experienced in the demo, which would be frantic, constant action?

Yes, it is definitely fair to say that. One of the things we were aiming to do is to make the game seamless. We wanted to blur the lines between action and cutscenes to make one seamless progression.

Asura would make a really cool fighting game character. Any thoughts on that?

Yes, we’ll talk to the other producers at Capcom to see what we can do. [laughter] Maybe we could put him in the next Marvel vs. Capcom game or something.