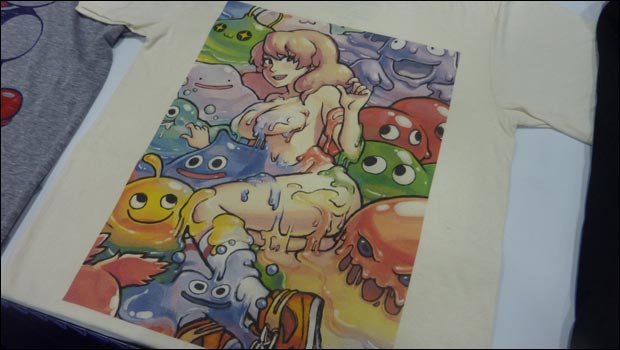 There’s a lot to see and do here on the San Diego Comic-Con show floor, but nestled away in a tiny booth in the middle of the massive convention center was Meat Bun’s booth with several interesting shirt designs on display.

I was immediately drawn to an Outrun-inspired shirt referencing one of my favorite pieces of music from its soundtrack titled “Passing Breeze” (available in both white and yellow), as well as the tantalizing design above featuring a woman covered by a variety of gooey creatures from across the world of gaming. I see everything from a Dragon Quest slime and babble to a Final Fantasy flan and an adorable poring from Ragnarok Online. Can you name them all?

If you can’t be here at Comic Con to pick up a shirt for yourself, you can also visit them online where they have several of the designs available here at Comic Con as well as many others. And don’t fret if you don’t see the shirt you want as many of these were reprinted just for Comic-Con and will be available via the online store again very soon. Which is your favorite?