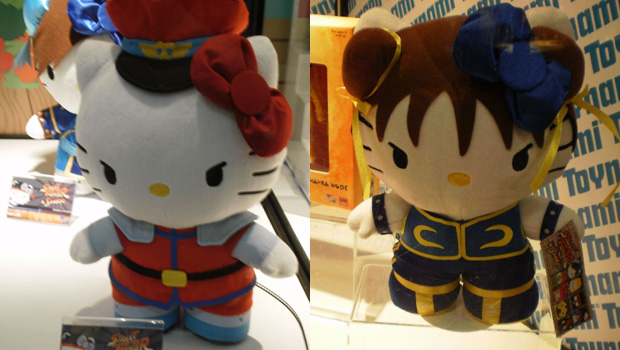 At the last San Diego Comic-Con, Capcom announced a partnership with Sanrio to dress Hello Kitty in all kinds of Street Fighter getups. It’s a grand collaboration spanning multiple pieces of merch, but I’m surprised it took this long to actually yield plush dolls. I would have thought those would be among the first products to appear.

At the Toynami booth this year, we can catch a glimpse of Chun-Li and the ironically more adorable M. Bison. What really sends these plushies over the moon are the angry eyebrows slapped on them. Because when I think “aggressive,” I think “Hello Kitty.”

Taking into account the Hello Kitty Sonic from the other day, it’s starting to seem like the little skank doesn’t care who she sleeps around with. What message are we sending the children?