Spider-Man: Edge of Time was shown off for the first time to the public here at San Diego Comic-Con. I gave Spidey the full workout during a preview event on Wednesday, both in his 2099 and Amazing forms. Some new time warping powers were shown off.

It was just a small taste of how Amazing and 2099 Spideys will work together from different times, but it was just enough to show me how much this game is like last year’s Shattered Dimensions, also from Beenox. That’s not necessarily a bad thing, mind you.

Both parts of this demo were all about fighting and getting a feel for the combat in Edge of Time. I started out playing as 2099 Spiderman, who had both a standard punch and a bigger, more powerful attack. Of course, both moves could be chained to make others, and coming off jumps or web slings made for more ways to mix it up. Blowing through room after room of baddies as 2099 Spidey to look for a key to access another area was pretty fun. It was like Shattered Dimensions, but a bit more slick and a lot more flashy. Punches and other attacks were satisfying.

To mix it up, the setting jumped to a very long free-fall section down a corridor where Spider-Man had to dodge pillars, barriers and other obstacles to make it through little tiny holes, all at high speed. It was fun at first, but I found myself eating pillar too often in what has to be the longest fall in a videogame ever. When I hit the ground the game transitioned to crawling. Spidey had to crawl past automatic security turrets and around charged plates to progress. I shot the turret cameras with some web to prevent them from seeing me crawl by. 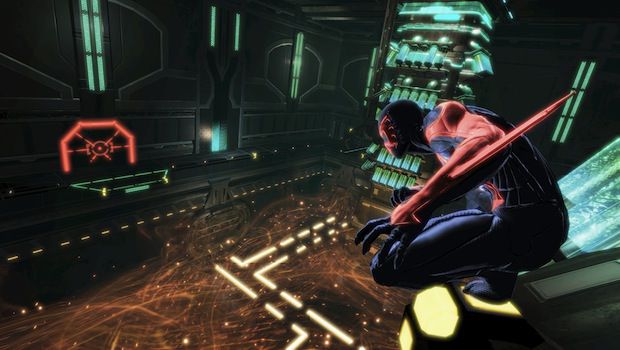 In another section of the game I played as Amazing Spiderman. He moved a bit faster, and it seemed like the stage and challenges were designed to keep him moving. Shielded enemies had me using the stronger of my two attacks to knock them defenseless, and then come in for the fast kill. I had to fling a lot of webs to keep moving from both strong ground enemies and pesky flying ones. By pushing both analog sticks in I was able to drop a temporary copy of myself as an evasion technique, or to distract some enemies while I took care of other business. Also handy was the ability to warp time. By pressing in both the L and R buttons I was able to catch bigger enemies in a small warp area to slow them down and beat them senseless. The big mix of techniques kept the heavy fighting interesting.

Spider-Man: Shattered Dimensions had lots of things going for it, but maybe it needed more time in the oven. It seems like Beenox has put a bit more work into the recipe for Edge of Time. It was only a small taste, but I can safely say it looks to be a fun romp, and that those that liked Shattered Dimensions will be into it.

Filed under... #Activision#Comic-Con#Spider-Man: Edge of Time