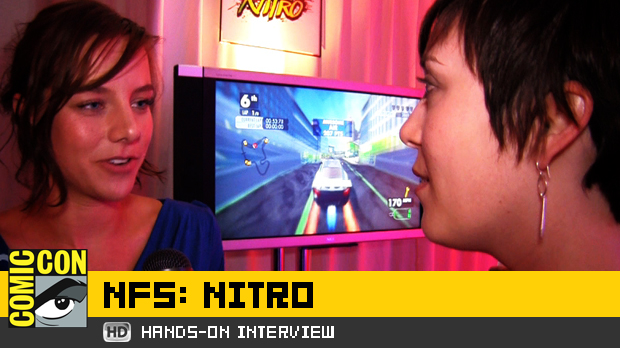 We had the chance to take Need for Speed: Nitro for a spin on the Wii at an EA preview event in San Diego a day before Comic-con officially kicked off.  This was the first time we were able to check out the title, which was also developed for the DS. The early verdict? This racer is crazy fun, and lives up to gameplay you’d expect from a NFS title.

This street racer takes players across the world, all while dodging cops, drifting, and hitting nitro boosts in straightaways. It’s compatible with several types of control schemes, including Wii Remote, Nunchuck, the classic controller, and even the Gamecube controller. But the Wii Wheel works fantastically. The control was tight and intuitive for the several races I played, and it worked so well that I had to wonder what was up with the other games that use the Wii Wheel.

I had the opportunity to play both single player and split-screen multiplayer tracks. Single player has you racing around obstacles and other vehicles to find turns to drift through. Drifting builds your nitro meter, which then lets you hit the boost and drive really fast. Speed, drift, avoid cops — it’s all pretty simple, but it works so well that you want to keep on going.

While we only saw a few tracks, there will be plenty to choose from in the final version. And scrolling through the options, it seems that there are a ton of licensed cars to pick from. A robust customization system will let you tweak your car’s appearance. And then you can one of many modes, including Team Race, Drag Race, Drift Challenge, and Eliminator. Also, up to four players can race in a world tour campaign.

We’re looking forward to spending more time with Nitro. We can’t think of any other Wii racing titles that stand up to what this one offers. What a pleasant surprise. Look for its release in November of this year.