Bertram, Stewie’s evil half-brother, was killed recently in one of the episodes. So in the new game, a Bertram from another dimension wasn’t happy with this, and is seeking revenge by killing all of the Stewie’s from every dimensions. You’ll be going through ten different dimensions in order to stop Bertram, and our latest look at the game took us to a level called Handicappable, where all the handicap people have risen to power and have made people without disabilities the minority.

The Family Guy humor was immediately present as soon as we got into Handicappable. All the parking spots are handicap spots, every curb has a blue line painted on it, and everyone you end up fighting has some sort of disability. The first enemy is a guy on AK-47 crutches, and he was even delivered by a short bus. It took about 20 awkward seconds for the bus lift to lower the guy off from the bus before he could attack you.

You’ll be playing as Stewie and Brian, and you’re able to swap between the two on the fly using projectile and melee based weapons. A second player can jump in at anytime for co-op action, but this is limited to local play only. Along with the guns, you can use special items like summoning Ernie The Giant Chicken to attack others or the Wacky Waving Inflatable Arm Flaling Tube Man to distract enemies. 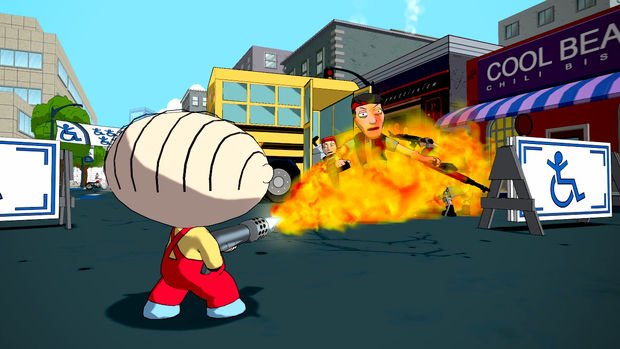 Eventually you’ll get to a point in the level where you have to fight Crippletron, which is a Voltron-like fusion of wheelchair bound people, with Joe Swanson forming the head. Sound familiar? It’s happened in an episode before.

As far as gameplay went, it looked like your standard affair. It’s a simple third-person shooter loaded with more references than a season of Family Guy. Overall the game looks like it will take about six to eight hours to complete, and there’s going to be a four-player local versus and challenge based modes to round out the package.

It’s going to be fun, but you’re going to have to be familiar with Family Guy in some form in order to enjoy this at all.