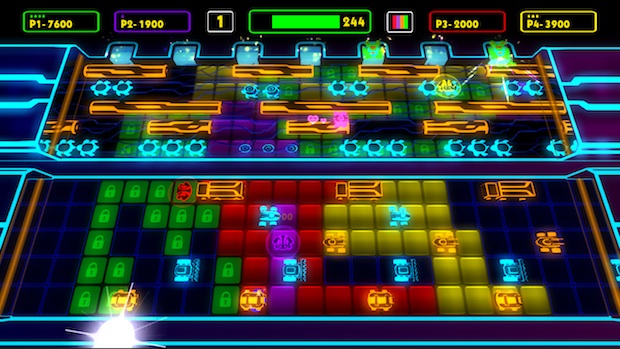 It’s weird to be playing a Frogger re-release at an event where super high profile titles like The Last of Us and Resident Evil 6 are being shown, but I’m glad I checked it out because I’m all about one of the game’s multiplayer modes called Tile Capture.

Tile Capture has up to four local players doing the standard Frogger thing, trying to move from the bottom of the screen across a busy road and a gator-infseted pond, and then onto their safe zone without being squashed, but in this mode as they’re hopping around, each tile they cross becomes changes color to match their player color. The goal is to get across the road with as many ground tiles changed to their respective colors as possible, with the frog with the most changed tiles in five minutes winning. Players can lock in changed tiles by moving to the safe zone quickly, enabling them to start at the bottom again to try to gain more. It’s a fast-paced and really fun twist on standard Frogger gameplay, and I’m looking forward to breaking it out at my next house party.

Of course, you can still get down with the standard arcade play in Frogger: Hyper Arcade Edition, as it’s one of the many available modes in the mix. Some modes have you doing things like moving your frog to paint a picture on the game board, or controlling two frogs at once (crazy!). Other modes let you dodge traffic and hop logs with Konami game graphics mods that give stages Contra or Castlevania themes.

Frogger: Hyper Arcade Edition is available now on PSN and XBLA for about $10.