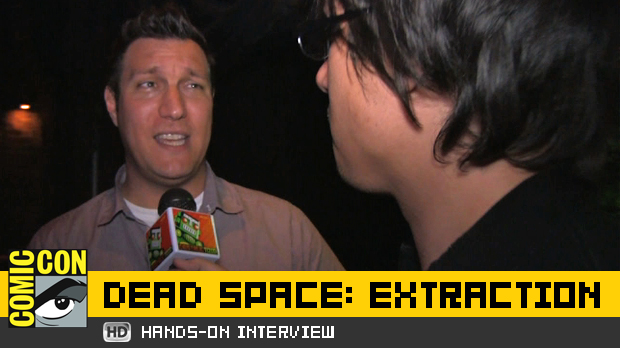 In this video you’ll get to see a first look at stage 7 of the upcoming Wii game Dead Space: Extraction, called Life and Death. We spoke with Senior Producer Steve “Dead Space Guy” Papoutsis on this new level and what to expect in the game, but he mostly made fun of my shooting style.

The stage opens with botanist Lexine talking to herself, doing the v-blogging thing. Honestly, she’s not looking too good — she’s stumbling around with some kind of sickness all while fighting off long-limbed peksy Necromorphs. I can’t even change the channel when I’m sick, so hats off to her. She proceeds on through the level to come across a huge bastard of a boss, one who has no problem charging at you at full speed. That’s okay, though, as I just smacked him with stasis, and then ran around his back and hit his weak spot.

I had a bit of help from my friend Jayson, who was able to jump into the game at any time by hitting a button on a second Wii Remote. Just as easily, the second player can drop back out.

It was nice to get to see a bit more of Dead Space: Extraction, but I really want to get it home and go through it at home where people can’t make fun of my shooting skills. Extraction releases in Fall of this year.