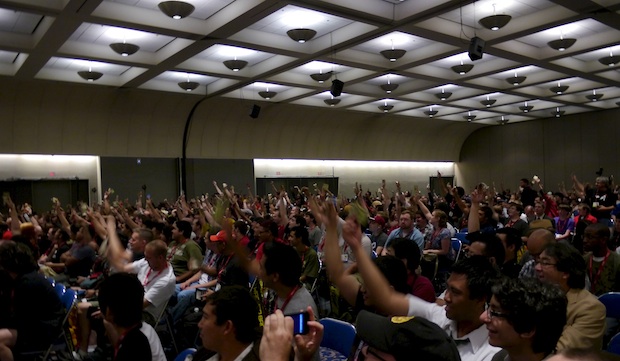 That’s a tease. We got the same tease as the opening slide of Yoshinori Ono’s presentation at a Capcom panel at San Diego Comic-Con today. The audience exploded in applause, but Ono quickly shut that down.

“I asked you to hold up a dollar bill if you wanted Darkstalkers last year,” Ono recalled, speaking to a large audience in their Street Fighter X Tekken panel today. He said that he took a photo of the crowd holding up the money last year and showed it to decision makers at Capcom HQ. Apparently that didn’t do much.

“I worked really hard over the last year to get [a new] Darkstalkers approved, but it didn’t really go that well yet. This time, do you have 10 dollar bills?”

The audience did not hesitate to thrust up hands filled with $10 and $20 bills. If this show of cash doesn’t get through to Capcom Japan, nothing will.