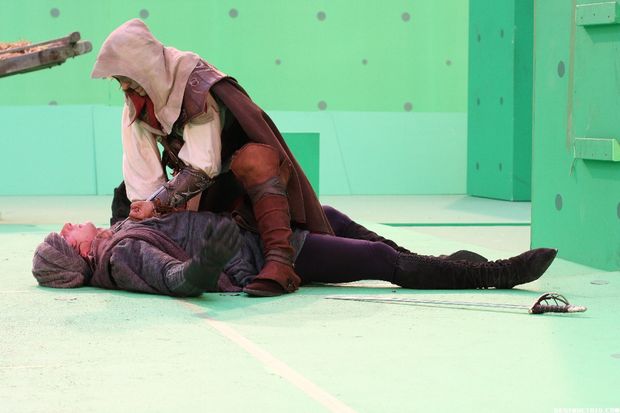 According to a report in the LA Times, Assassin’s Creed II: Lineage will span three live-action films, between 10 to 15 minutse in length. The shorts — which will be released in November — will serve as an epilogue for the upcoming sequel, with of the actors cast also providing voice-work and motion-capture for the game.

See that green screen up there? Ubisoft is employing some fancy Hollywood techniques and talent for the films — Hybridge Technologies, the studio behind the visual effects for 300 and Sin City, will help bring the shorts to life.

LONDON, UNITED KINGDOM – July 23, 2009 – Today Ubisoft detailed a panel around Assassin’s Creed II to be held on July 23, 2009 from 1:45–2:45 p.m. in Room 6A at Comic-Con in San Diego. The panel entitled “Assassin’s Creed II: Video Games and Hollywood Converge” will touch on the evolution of entertainment creation and distribution while highlighting the bridge between video games and film. Panel hosts will be Yannis Mallat, chief executive officer at Ubisoft Montreal and Pierre Raymond, founder and chief executive officer of Hybride Technologies, the visual effects studio behind 300 and Sin City, along with special guest Corey May, Assassin’s Creed II video game scriptwriter.

Recently, during the E3 Expo in Los Angeles, Ubisoft announced production at Hybride Technologies on a series of short films based on the upcoming Assassin’s Creed II video game. The Comic-Con panel will include a discussion of the production of these short films, a viewing of a teaser video showing new shots from the filming and development of the short film series, as well as the first public demonstration of the Assassin’s Creed II video game.

“Ubisoft has detailed our vision for convergence over the past two years. Now, at Comic-con, we are exclusively revealing one of the first building blocks to this strategy: Assassin’s Creed II: Lineage,” said Yannis Mallat. “We’ll be discussing the links between the game and the short film series with some of the key players of the project. We are thrilled to be able to share the results of our efforts with the Comic-com audience.”