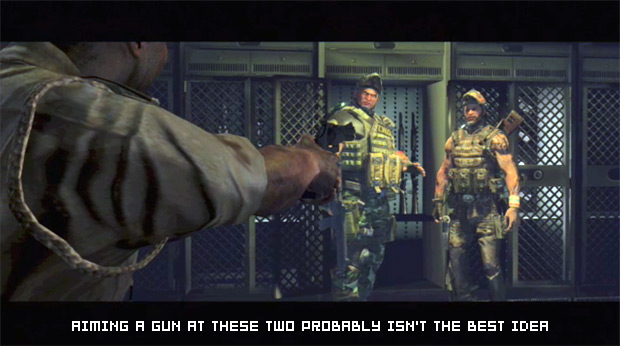 Either this latest video for Army of Two: The 40th Day is superbly cut, or the dialog for Salem and Rios has grown up ever so slightly. As detailed after the break, the game will have “morality moments” where you are prompted to make a moral choice by hitting “A” or “B,” and then watch a cut scene unfold.

Seeing as how the outcomes of these choices end up snowballing into some drastic event, EA has brought on comic artists Chris Bachalo and Jock, hence the relevance to Comic-Con. Where do they come into play, you ask? Their illustrations depict the “long term impacts” of your choices, that’s where.

For an example, take a look at the two images in the gallery below. The best part of the video, easily, is when they show footage of two gamers arguing over whether to go with choice A or choice B in The 40th Day. This game is serious business, folks. Real talk.