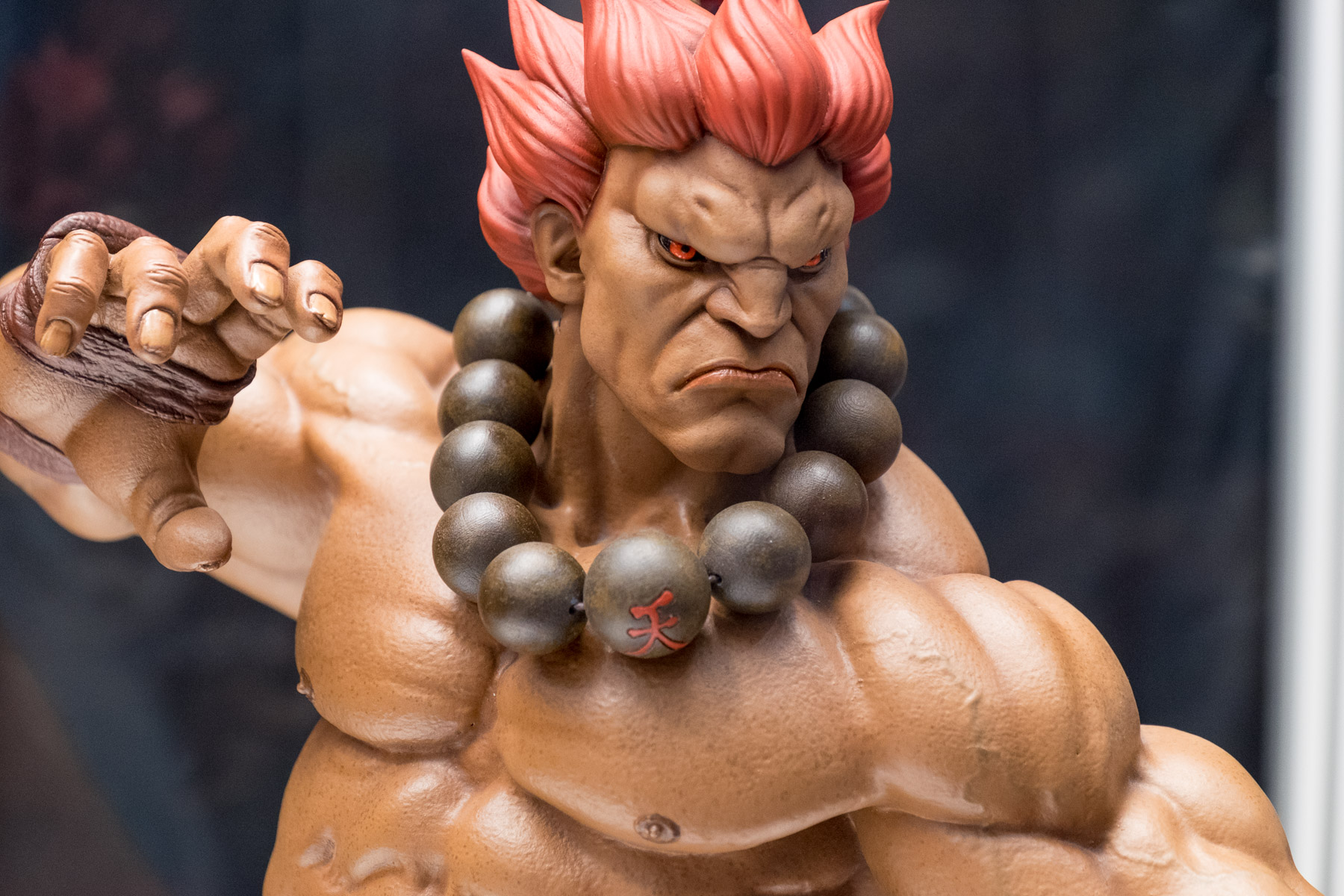 What is Comic-Con if not a venue to push merch?

We may not equate SDCC with toy collecting, but that would be a mistake. The industry’s biggest names are always in attendance; who would give up a chance to market to that many pairs of eyeballs?

Indeed, the main reason I used to go to Comic-Con was to see what kinds of plastic goodness would be shown off for figure collectors. The event isn’t big for the Japanese manufacturers (except Kotobukiya as they have an established US presence) but the Western toy makers are no less impressive. So here are my toy highlights from the show!

If you only see one collectible-related booth at Comic-Con, it has to be Sideshow’s. They bring the biggest display every year and pack it with large scale, highly detailed figures for prices that will make your bank account feel sad and inadequate. 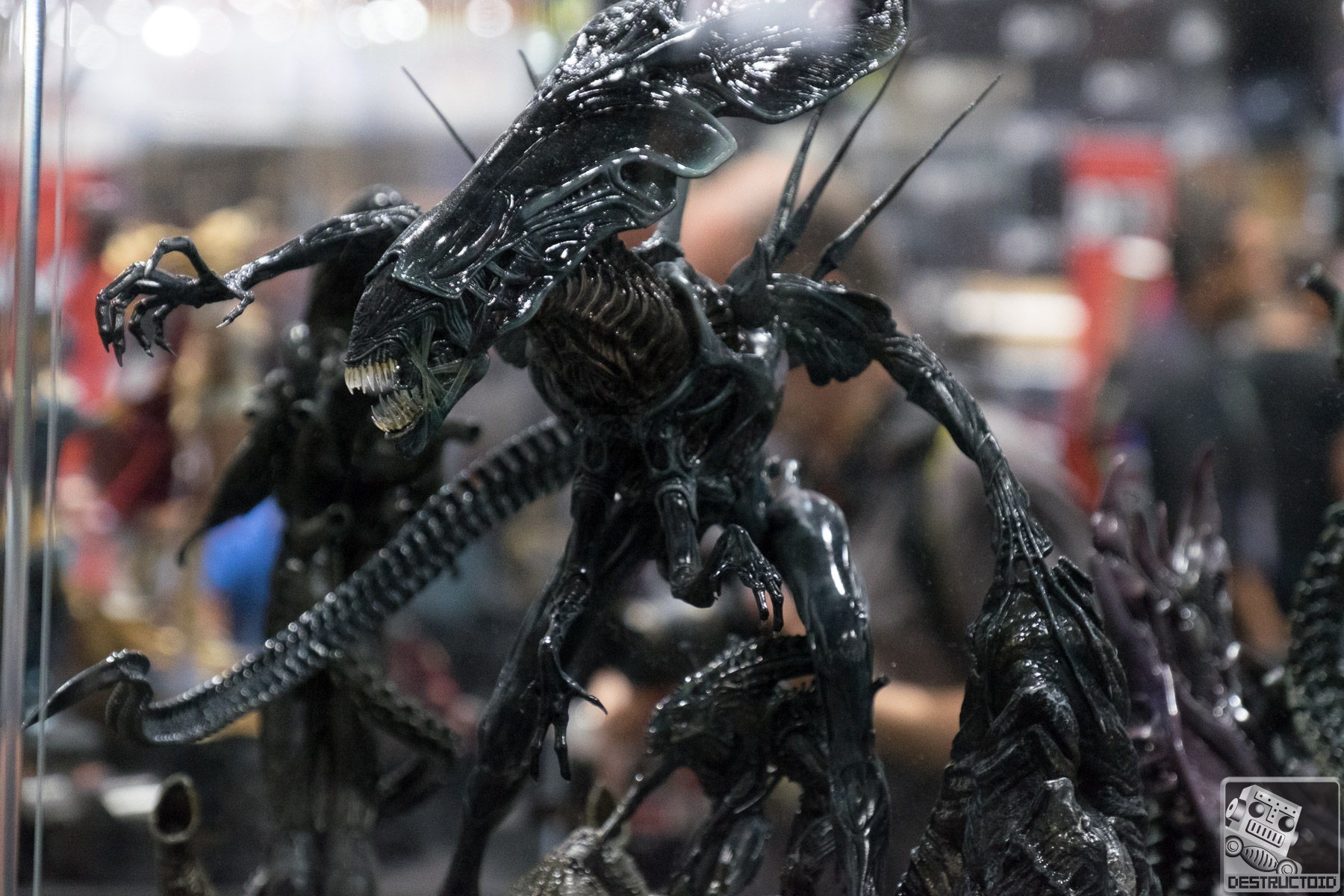 There are no bad Sideshow figures, but I’ll be damned if this Alien Queen didn’t make my heart flutter a tad more than the rest. The Queen herself is impressive, but there are even smaller warrior aliens on the base! 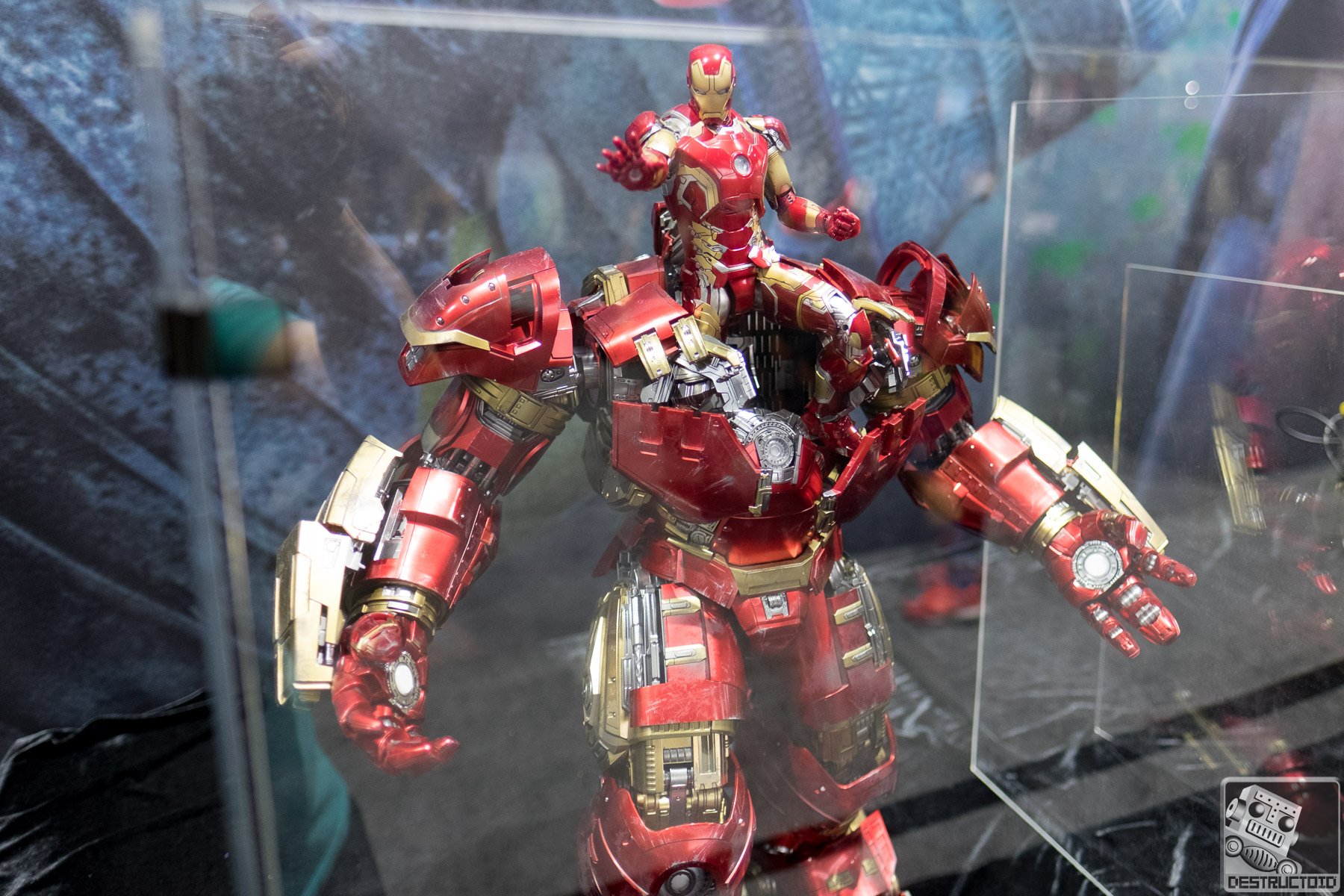 Sideshow is also a distributor for Hot Toys, a company known for highly detailed 1/6-scale poseable figures. They’ll often bring prototypes and one-offs to make some seriously eye-catching displays. I’m not sure which category this Hulkbuster Iron Man falls under, but consider my eye caught.

Anime figure collectors should be familiar with Kotobukiya, but they license a diverse array of properties to appeal to everyone. Their most famous line is the Bishoujo line, which taps artist Shunya Yamashita to put his own spin on characters from comics, games, and even movies (lots of gender bending for that last one). 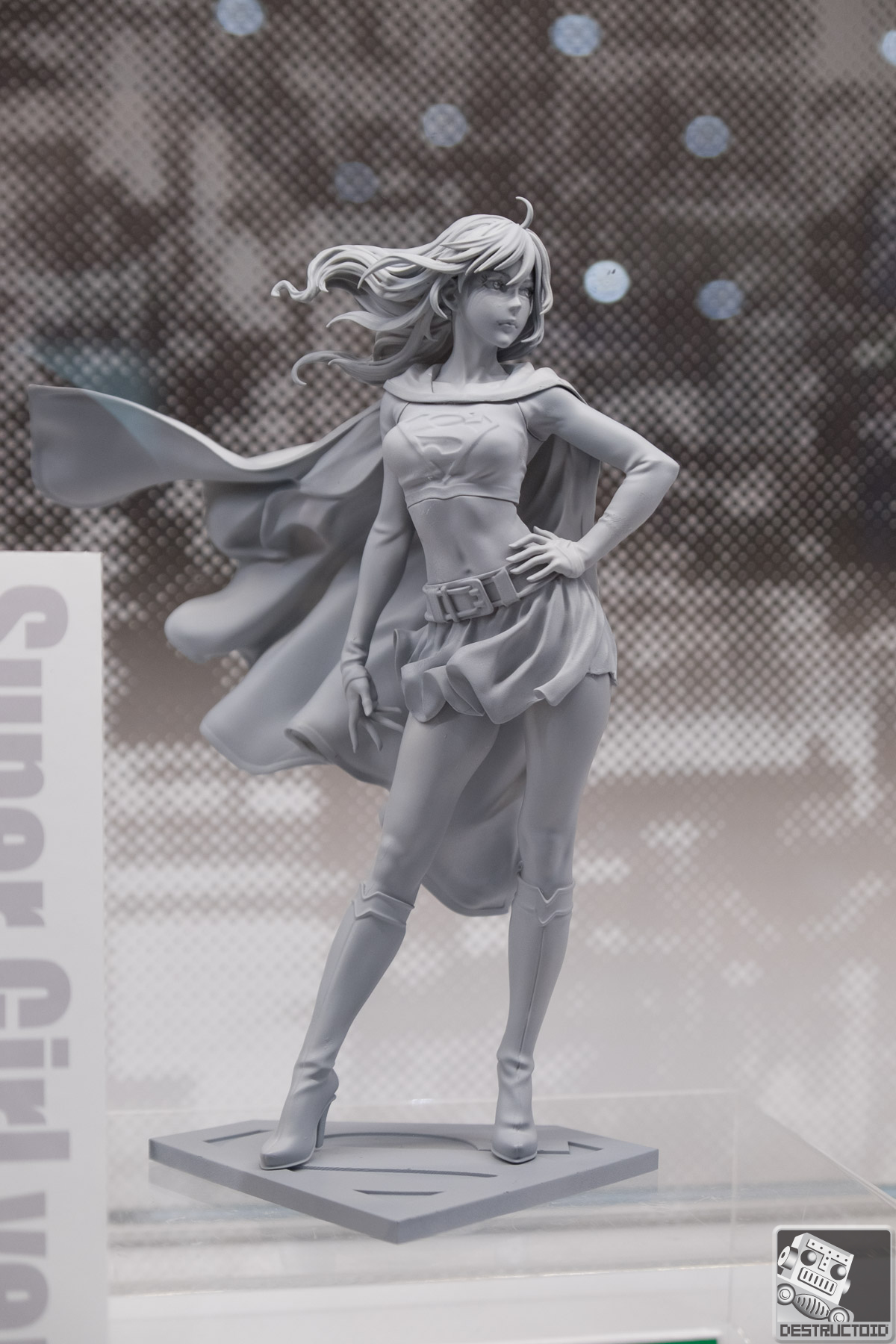 Kotobukiya already has a Supergirl in their Bishoujo lineup, but I’m still looking forward to this second version. This sculpt has some beautiful, flowing lines that fit the character better than the “look at my butt” pose of the original. 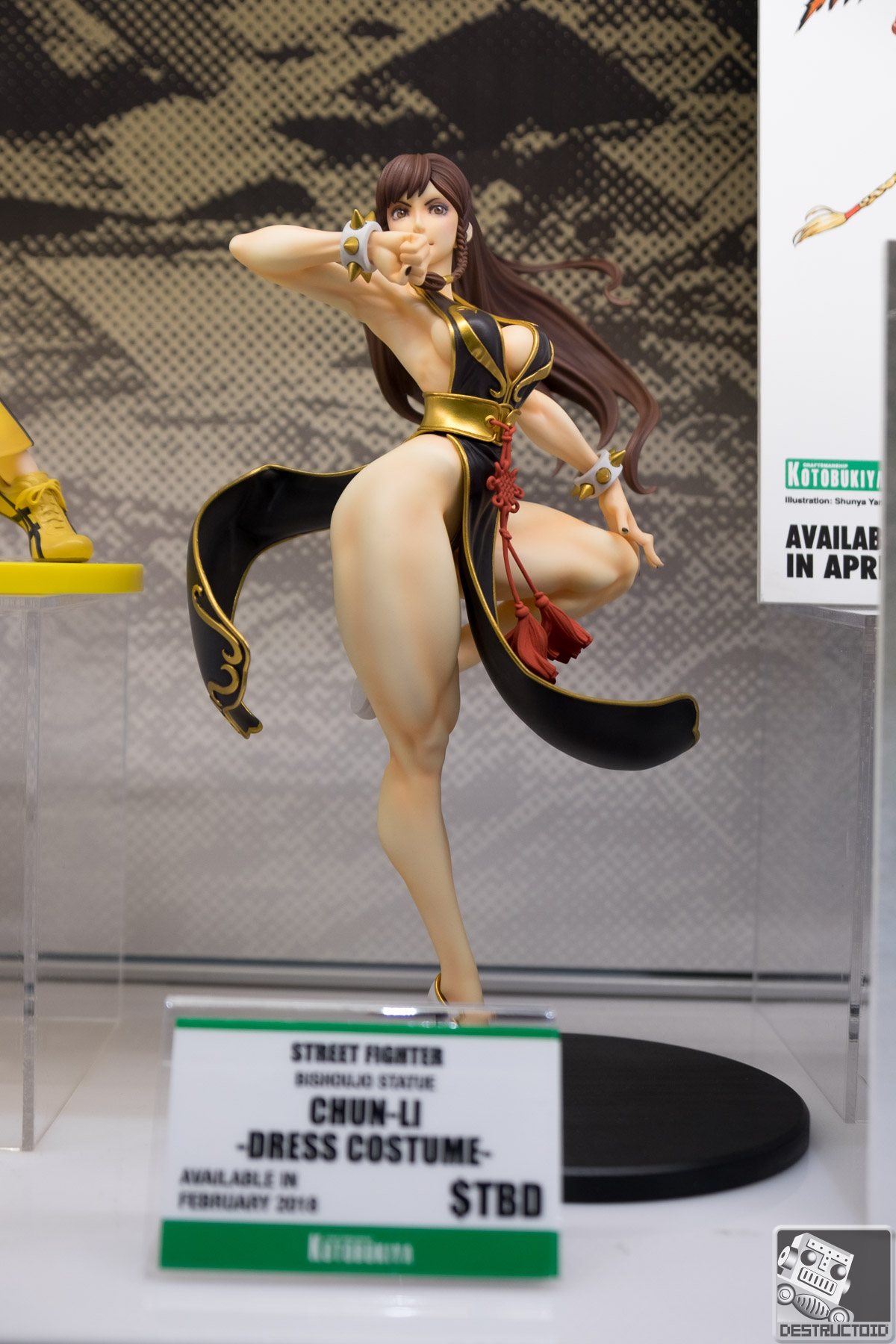 Kotobukiya brought in this new Chun-Li prototype moments before the convention started. Can you say “thunder thighs”? I suppose if you’d need some powerful legs to pull off a spinning bird kick.

Despite being the largest hegemony of figure makers in Japan, Good Smile Company’s presence at SDCC was limited to what amounts to a single Ikea display case operated by We Love Fine. I guess that’s understandable as Wonder Festival is only a few days away. 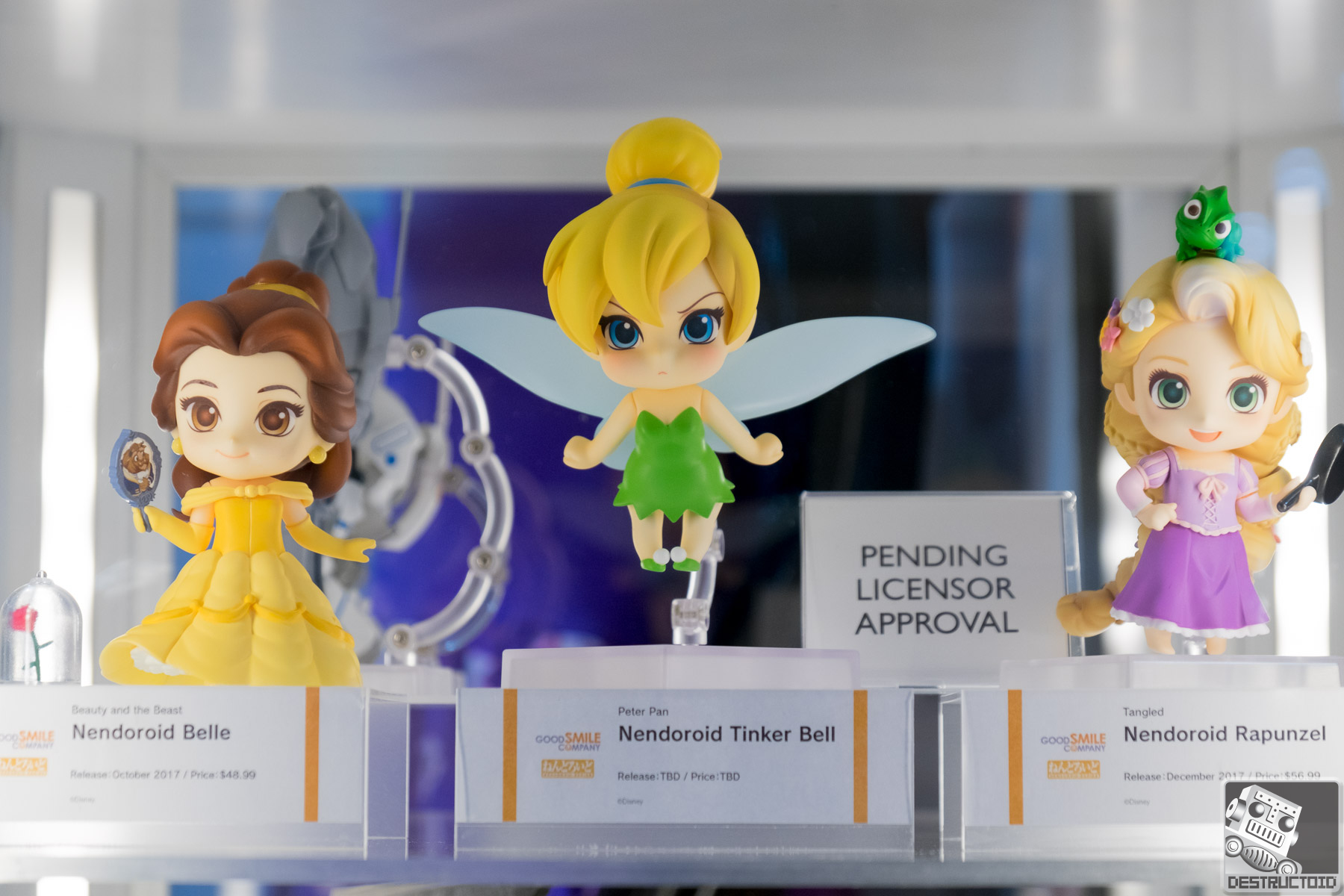 This Nendoroid Tinkerbell has to be my favorite small figure of the event. I don’t even go for the Disney stuff usually but that pouty face is just too cute. 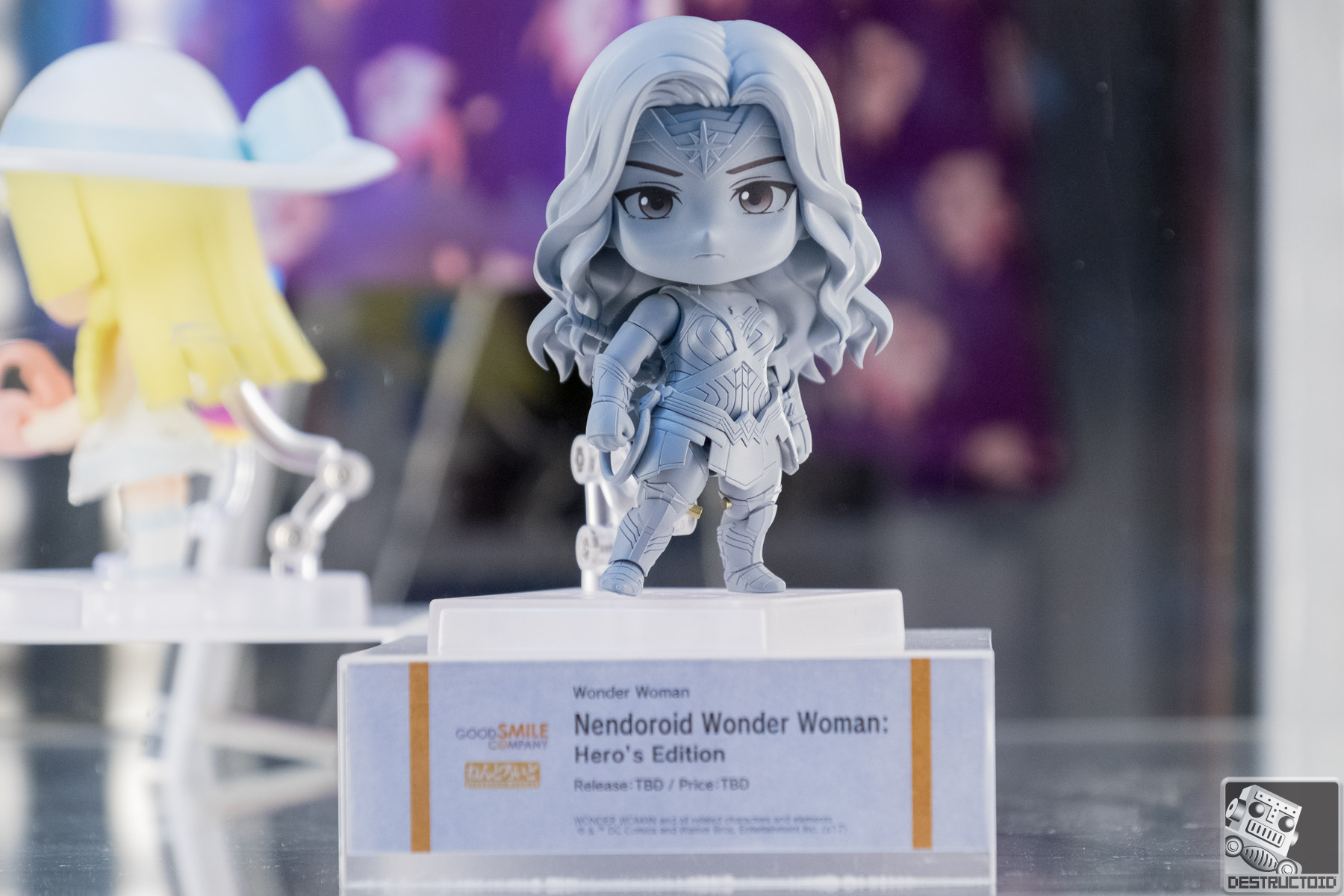 GSC did have a brand new sculpt to show off: Nendoroid Wonder Woman! She looks majestic, as if to remind me that I should go see the damn movie.

Blizzard’s booth was full of Overwatch toys. We’ve covered a few of them: Nendoroid Tracer, Nendoroid Mei, and Nendoroid Mercy. All three were on display at SDCC, as well as figma Tracer and this ridiculous 19-inch tall D.Va and MEKA figure. 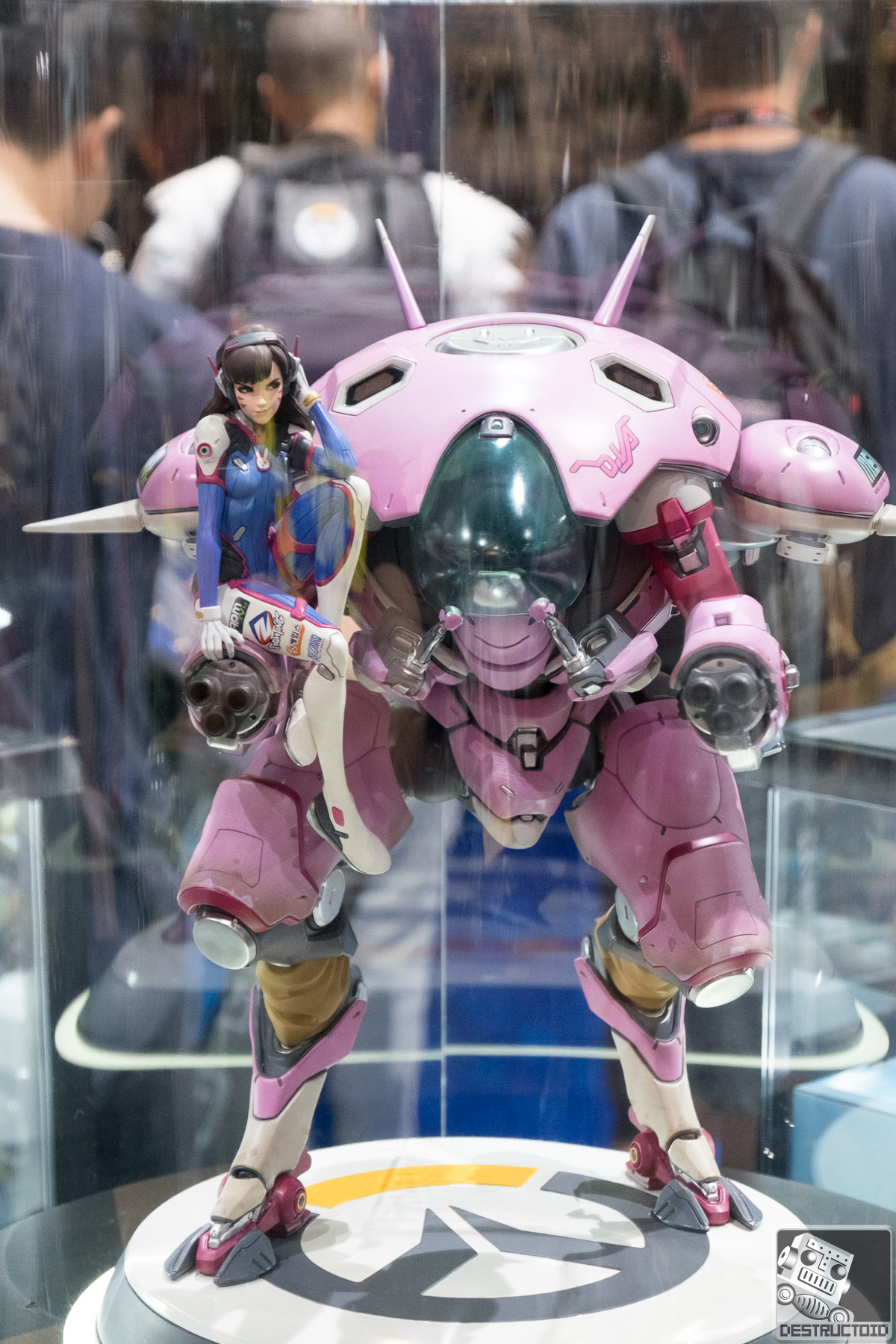 I pulled up the product page for this and it says it weighs 40 lbs in its packaging. Holy shit.

PCS, or Pop Culture Shock, stuck to Street Fighter characters throughout their early years. So if you want a manufacturer who knows how to sculpt Street Fighter, PCS is the one to keep an eye on. They’ve produced a number of great Akuma figures, but I’m more drawn to their wacky Dhalsim statue. 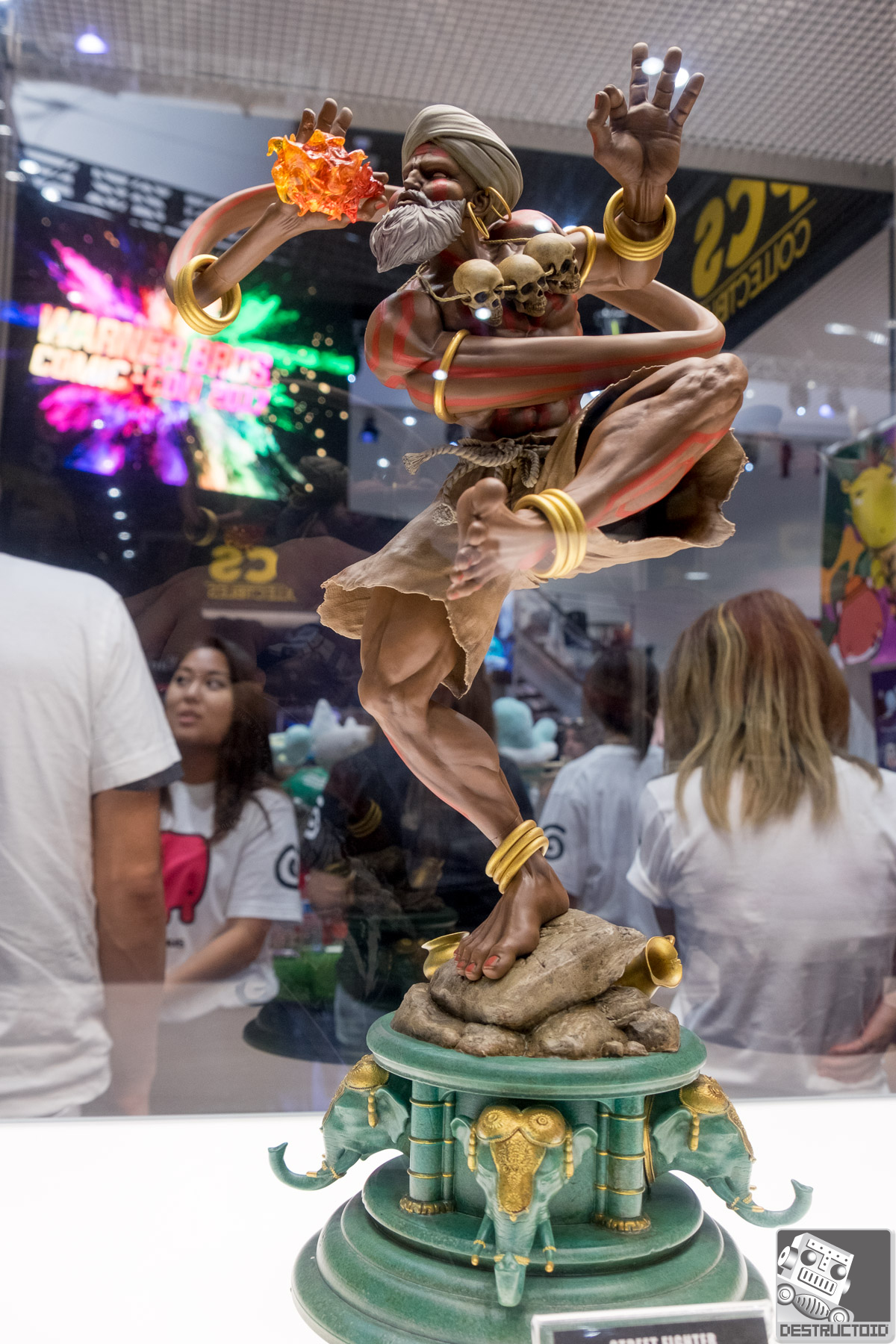 I don’t know the first thing about Dhalsim’s competitive viability but this statue is better than any other Street Fighter statue. That’s a straight up fact. 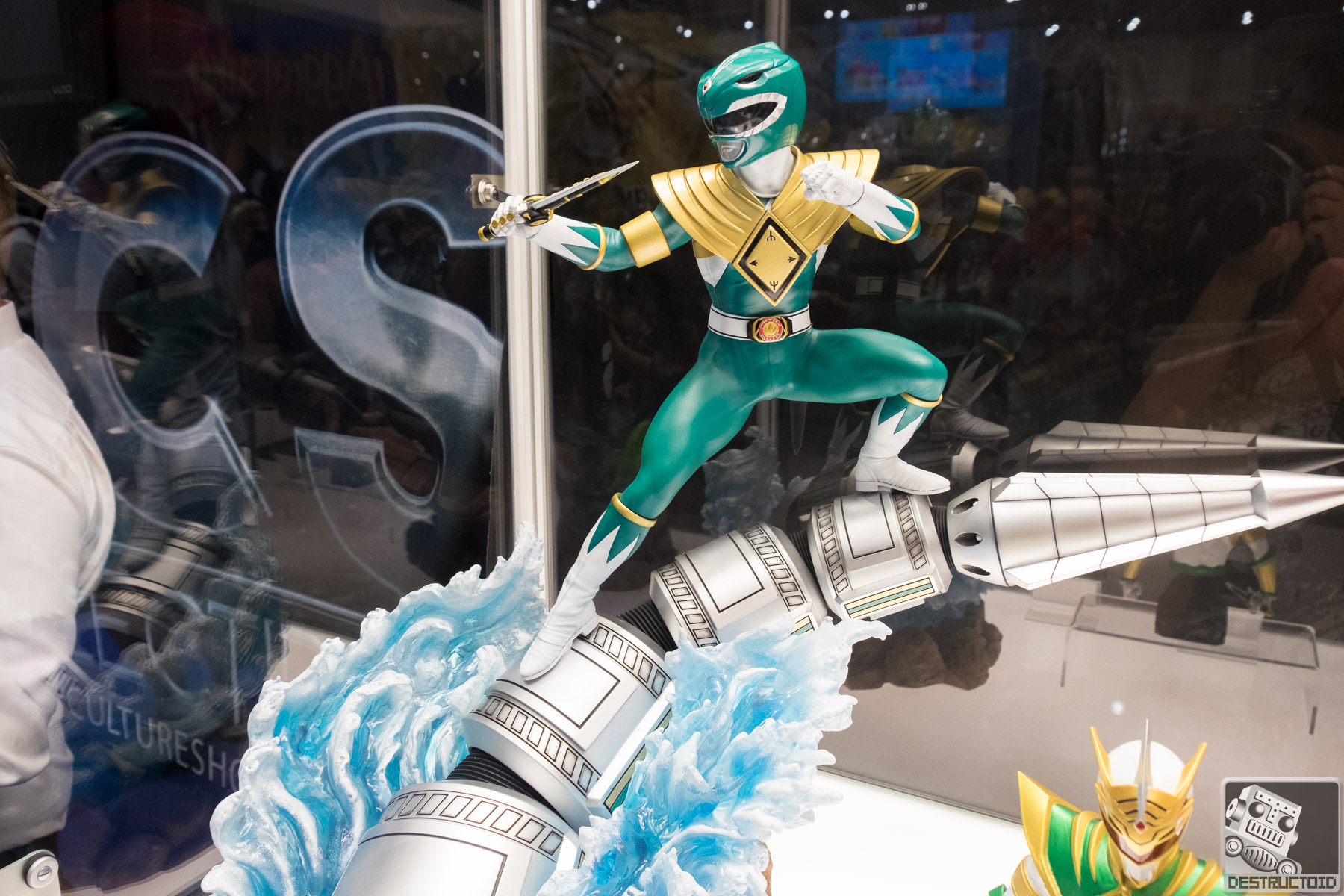 Outside of the realm of Street Fighter, PCS has offerings such as this statue of the Green Ranger riding the tail of the Dragonzord. If I had known as a child that this would one day become a real product, I would have managed my money way better.

I don’t usually get around to all the art toys, but ThreeA had its own gallery exhibition and that’s just something I couldn’t miss. ThreeA specializes in large-scale figures that have a grungy, pop/rock aesthetic. They’re not a large operation, so I was surprised to find out they were having a special exhibition outside of the convention center. 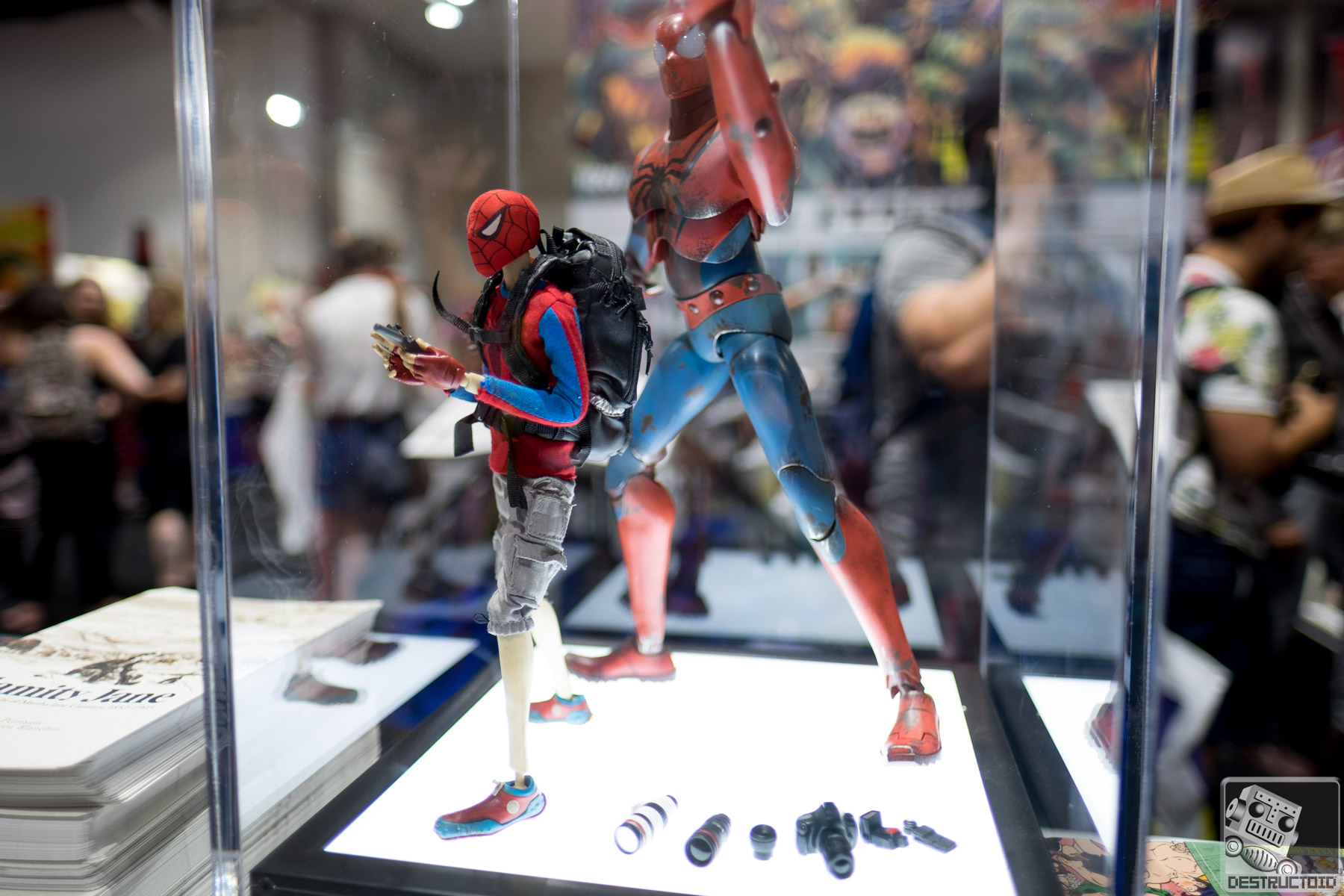 This Spider Man figure was shown at both the exhibition and the Top Shelf/IDW booth. I like the spin it puts on the character, focusing on his (Canon) photo gear and, uh, a remote controlled robot. 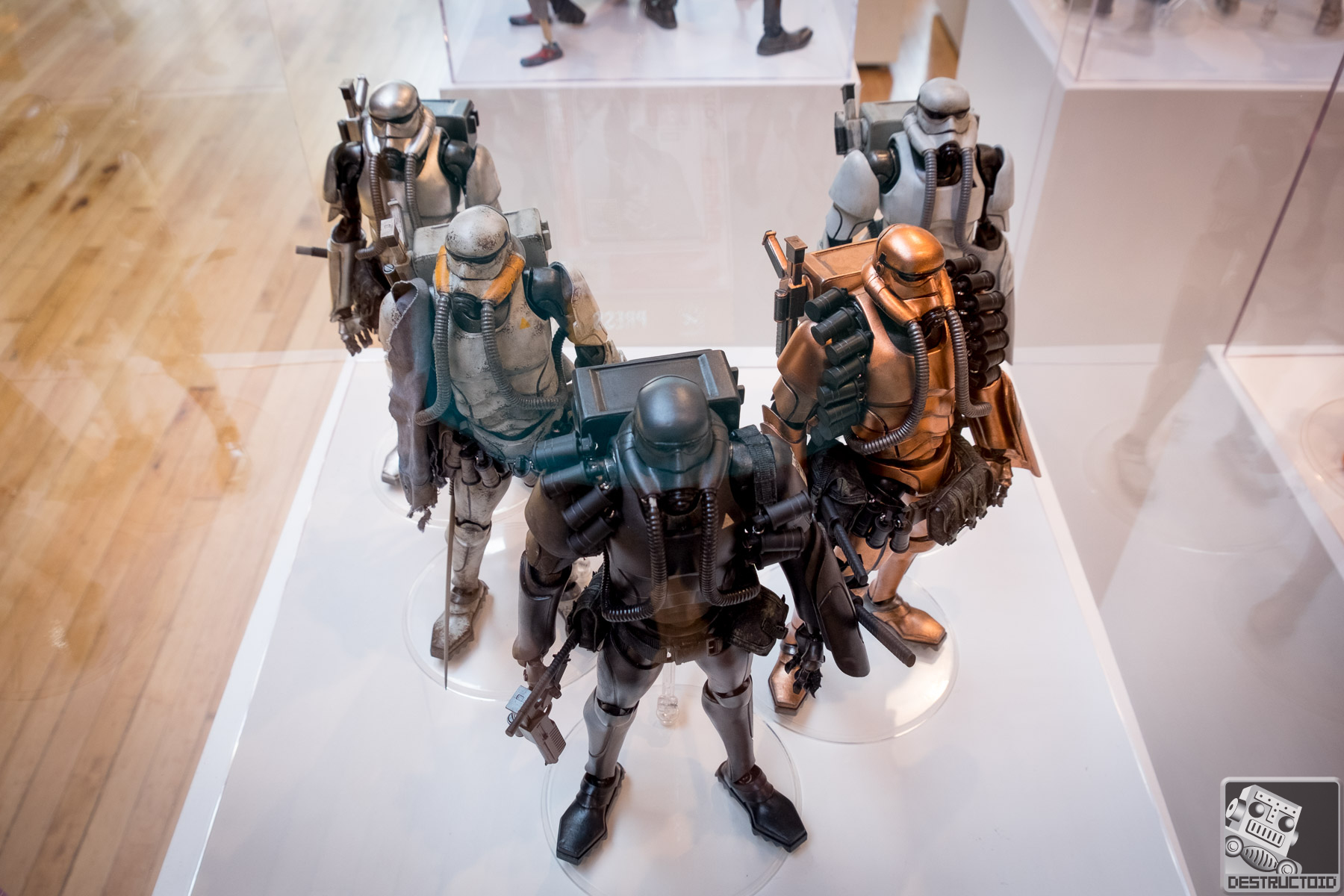 ThreeA had plenty of Star Wars stuff for their exhibit too, including these grunged-up Stormtroopers. They also touch on various gaming and movie licenses, so definitely keep them on your radar if you’re looking for more artistic collectibles.

That’s it for my personal highlights, but there are more photos in the gallery. Let us know which ones piqued your interest… or which ones you hated, or what you’re hoping to see in the future!