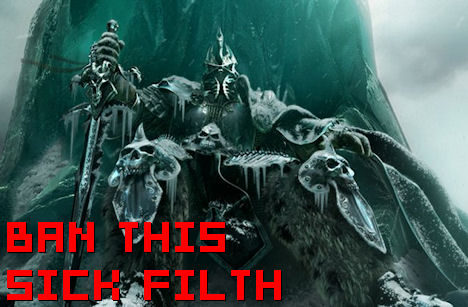 You may have heard of Jonathan Lee Riches, but if you haven’t, here’s a quick introduction. The man is currently serving a prison sentence for wire fraud, and has spent his time in jail filing frivolous, unbelievable law suits. He likes to try and blame videogames for his fraud, claiming that Rockstar “put [him] in prison,” and suggesting that he at risk from “violent inmates who played Grand Theft Auto who will knock [him] out and take [his] gold Jesus cross.”

He has also tried to sue the Eiffel Tower, Nostradamus and the Hitler-era National Socialist Party … somehow.

The latest in Riches’ half-baked legal chicanery is a third-party motion in the MDY Industries vs. Activision case. The lawsuit is over the former’s bots being used in the latter’s game. Riches has decided to “help” by suggesting that his mind was twisted by World of Warcraft and — just like Rockstar — Blizzard is to blame for his identity theft:

Yeah, he’s quite the little shitehawk. I really wish criminals weren’t taught by anti-game lobbyists just how easy it is to blame videogames for their crimes. They have learned how to take a diminished responsibility for their actions thanks to certain individuals practically telling them they can. Although, considering Riches has tried to make defendents of The Roman Empire, Che Guevera and The Garden of Eden, I don’t think this guy needs an excuse to play the blame game. He’s light years ahead of anybody else on this planet.