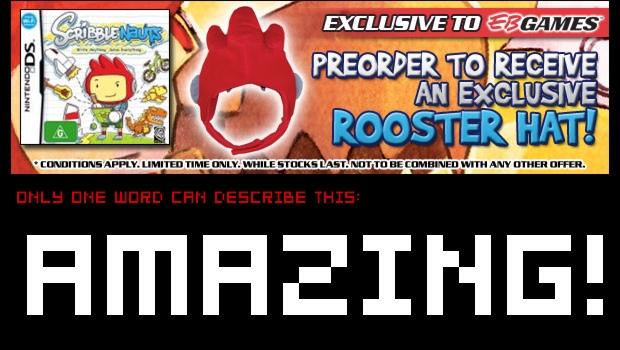 Australia rocks. I know, I’ve been there. It’s a very cool place with good people. The games are too expensive, but the world is about to make up for that because Australia is the only place confirmed to be receiving the greatest pre-order gift ever from Scribblenauts and EBGames. Every person who pre-orders the game will receive a free rooster hat! For free! This is surely the greatest game tie-in item ever. Night vision goggles? Screw ’em. If you aren’t wearing a rooster hat, you ain’t nobody. I fully expect 90 percent of Australia to be sporting these by the end of the year.

There is no mention of a rooster hat on the US side of EBGames (better known as GameStop), but Dtoider SiK99 informs us that he checked with a friend who works at GameStop who says that the hat will be offered in the US as well. We’ll just mark that as a rumor for now, but if it’s true I take back all the nice things I said about Australia.