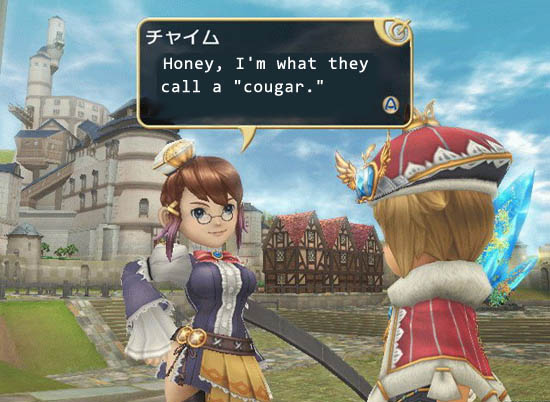 During Nintendo’s Fall 2007 Conference, we heard a bit about a new Final Fantasy: Crystal Chronicles title that would kick off the upcoming WiiWare channel, and now a few more details and some screen shots have been released.

In Final Fantasy Crystal Chronicles: The Young King and the Promised Land, you become the Young King named Leo. As Leo, you use a memory-based crystal power called “The Architect” to rebuild your land. This power needs spirit stones, and you’ll have to quest for these powers to continue rebuilding your town.

As with most RPGs, screen shots don’t usually go past characters with text boxes over their heads, but there are a few shots of a building appearing out of nowhere. There’s also some newer pictures of the saucy, bespectacled personal advisor to Leo, named Chime.

The story is said to take place after the events of the GameCube Final Fantasy: Crystal Chronicles, though this time the game comes as a download, and according to Japanese pricing, it will cost less than $15.

Japan will get the first chance to play Final Fantasy Crystal Chronicles: The Young King and the Promised Land in March of 2008, though we’re still waiting to hear about North American release dates.