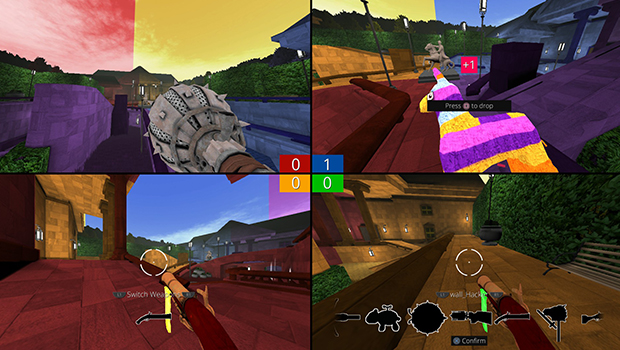 Oh lord, we’ve known for a while that Screencheat is going to cause so many punch-ups when it comes to Xbox One. But now the developers Samurai Punk has announced it will also be coming to the PlayStation 4, endangering the safety of a whole new load of players.

The game’s been out on PC for a while, and the Xbox One release is planned for the latter half of 2015, but the idea is still pretty dang clever and worth mentioning. Screencheat is a multiplayer FPS that whether you play online or locally presents itself in split-screen.

The catch is that everybody is invisible, forcing players look at each other’s sections of the split-screen to find and kill each other. Power-ups in the game are based off common hacks found in other FPS games such as wall-hacking. You know when your brother hit you for screen-peeking in Halo? Yeah it’s that, but as a game.

Publisher Surprise Attack Games hasn’t confirmed a release date for the PS4 version yet, but it’s safe to assume it will be coming out around the same time as the Xbox One version. All I can confirm is that A&E admissions will rapidly increase when I kick the shit out of my friends for screen peaking god damn it.