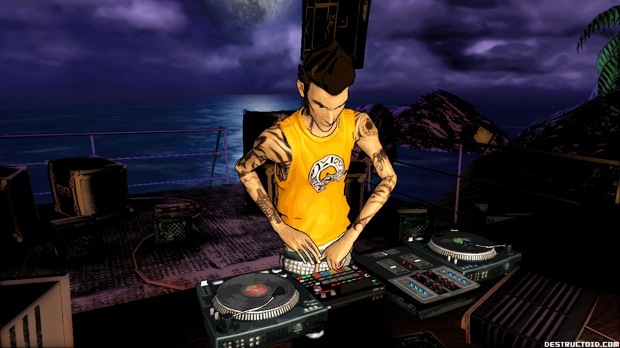 It’s like a non-fun version of Little Mac versus King Hippo. Genius Products And Numark Industries have filed a lawsuit against Activision and 7 Studios over Scratch: The Ultimate DJ.

The suit alleges that that “Activision has engaged in intentional interference with contract, breach of contract, conversion and misappropriation of trade secrets obtained from Genius to purchase 7 Studios.”

But wait, that’s not all: the suit also alleges “that Activision and 7 Studios have conspired to withhold the current version of Scratch in an effort to delay the development and release of Scratch and to gain access to proprietary technology.”

Shortly before this legal mess, Activision attempted to acquire Scratch from Genius. Genius believes Activision made the move because Scratch was slated to hit store shelves well before Activision’s own DJ game, DJ Hero.

Now, we’re at the juicy part. While under a NDA related to the game, Activision acquired Scratch developer, 7 Studios — a big no-no. In addition to the contractual issues that arise from the acquisition, Genius believes that Activision and 7 Studios are currently withholding “work product, code, and proprietary game controller” in an attempt to prevent “Scratch from getting to market on a timely basis.” Or, you know, ever.

[Update: You like legal speak? The entire document, filed in court earlier today, can be found in the gallery. Do you think Genius and Numark have a case here?]

Company Seeks an Immediate Temporary Restraining Order, Order to Show Cause and Expedited Discovery Order
Suit Filed to Protect the Intellectual Property and Proprietary Technology to Ensure the Launch of Scratch: The Ultimate DJ in fall 2009

SANTA MONICA, Calif.—April 14, 2009 — Scratch DJ Game LLC, a joint venture between Genius Products, LLC (“Genius”) and Numark Industries LLC (“Numark”), announced today that it has filed legal action against Activision Publishing, Inc., a subsidiary of Activision Blizzard, Inc. (NASDAQ:ATVI) (“Activision”), and California 7 Studios (“7 Studios”) and its Chief Executive Officer, Lewis Peterson, in the State Court of California seeking injunctive relief. The suit alleges that Activision has engaged in intentional interference with contract, breach of contract, conversion and misappropriation of trade secrets obtained from Genius to purchase 7 Studios, which is under contract to develop the much anticipated new Hip Hop video game, Scratch: The Ultimate DJ (“Scratch”).  The suit alleges that Activision and 7 Studios have conspired to withhold the current version of Scratch in an effort to delay the development and release of Scratch and to gain access to proprietary technology.  In addition to substantial damages, Scratch DJ Game LLC is asking the court to order the game’s immediate return, and other injunctive relief.

Prior to undertaking these wrongful actions, Activision approached Genius with an offer to acquire Scratch.  The offer was rejected.  It is alleged that Activision then commenced the process of acquiring Genius’ contract developer, 7 Studios, while under a non-disclosure and confidentiality agreement with Genius.  It is also alleged that after Activision acquired 7 Studios, the two companies began conspiring to prevent Scratch from getting to market on a timely basis by withholding work product, code and the proprietary game controller.

“We believe that Activision realizes the tremendous opportunity that our game, Scratch, represents to the video game industry, the retail marketplace and the consumer.   After demonstrating our game, pursuant to the confidentiality agreement with Activision, we believe Activision concluded that Scratch: the Ultimate DJ is a superior offering to their prospective game, DJ Hero,” stated Mr. Trevor Drinkwater, President and CEO of Genius Products, Inc.  “We believe that Activision and 7 Studios have improperly used confidential information obtained from Genius and 7 Studios to interfere with our efforts to complete the game.  In short, we believe that Activision is attempting to sabotage the release of our much anticipated game and prevent it from getting to market prior to the release of DJ Hero.”

Jack O’Donnell, Chief Executive Officer of Numark, added, “We also firmly believe the recent actions by 7 Studios are an obvious breach of the development agreement and we look forward to receiving our work product and property back, and completing and successfully launching our game on schedule.”

Scratch combines DJ tricks with great free-form game play. Scheduled to arrive in stores during the fall of 2009, Scratch is set in distinctive urban environments and features songs from the biggest names in Hip Hop such as Kanye West, Lil’ Wayne and Black Eyed Peas. Players can choose from a diverse array of DJ personalities to make their way from bedroom DJ to headlining DJ at the hottest nightclubs. Scratch players use a realistic turntable controller to manipulate music tracks in real-time. Called the Scratch Deck, the controller features a touch-sensitive turntable and authentic Akai Professional MPC-style drum pads, and puts the iconic tools of the DJ and Hip Hop music producer in the hands of the player. The Scratch Deck was developed by Numark, the world’s leading manufacturer of DJ equipment.

Genius chose to work with Numark on the development of the controller for Scratch based on Numark’s unmatched innovation and position in the world of DJ products. DJs have been using Numark gear to produce scratches, breaks, and beats for more than 30 years, and the company has developed a number of products that have changed the landscape of the DJ world. Numark’s expertise with hardware controllers for digital DJ software made them the perfect partner on Scratch.

Mr. O’Donnell stated, “By leveraging our 30 years of world leading expertise in DJ equipment design we are able to provide gamers with an extremely realistic turntable controller, Scratch Deck, which will be sold in conjunction with Genius’ video game, Scratch: the Ultimate DJ.  The industry feedback on our controller and the video game has been very positive and we are excited about this growth opportunity.  Our goal is to provide a realistic controller for the game where the player can actually learn how to be a DJ.  The controller, unlike our competitors’ offerings, simulates real gear used by professional DJs.”