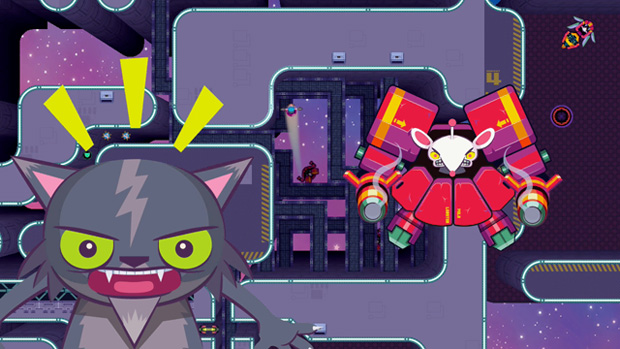 You thought all that talk about paying attention to indies was just lip service, and that Nintendo wasn’t going to follow through on support? You thought wrong! Nintendo is loving the indies at its E3 booth this year!

Mario isn’t the only one getting all “catty.” South Welsh studio Dakko Dakko is hoping to bring Scram Kitty and His Buddy on Rails to the Wii U eShop later this year. It’s got lab mice and rats trying to take over the world and kill all the cats, and you’ve got to save the day while riding an anti-gravity, wall-hugging buggy. The game is literally on rails!

By the way, the “scram” in the title doesn’t mean “go away.” It’s Welsh slang meaning “to scratch.” It’s “Scratch” Kitty! See? You can have fun and learn something new in the process!

Your pet, the titular Scram Kitty, has gone missing, and it’s up to you to save him and all his feline friends from the clutches of power-hungry super rodents. But there’s no pest control spray here! Only a magnetic cart that from which you must shoot and swing your way to victory.

You actually have a top-down view of the action, and by jumping off one wall you can affix yourself to another. Or you can jump and latch onto a floating enemy, making sure to jump back off before you are noticed. You can’t get too much air time, however, as you will plummet to your doom if you don’t quickly stick to another surface.

As you roll around, tilting your stick in the direction of the walls, you can press buttons to either shoot your guns outwards to the side, directly in front, or at 45-degree angles. You have to destroy mines blocking your path, some which require a specific color-coded weapon to clear out, all while recovering cat cages.

It really takes some getting used to the new paradigm, but once you get the hang of Scram Kitty, you can perform wild leaps of faith from one wall to the next while effortlessly plugging away at rats in flying mechanized armor. It’s not your typical platformer, that’s for sure.