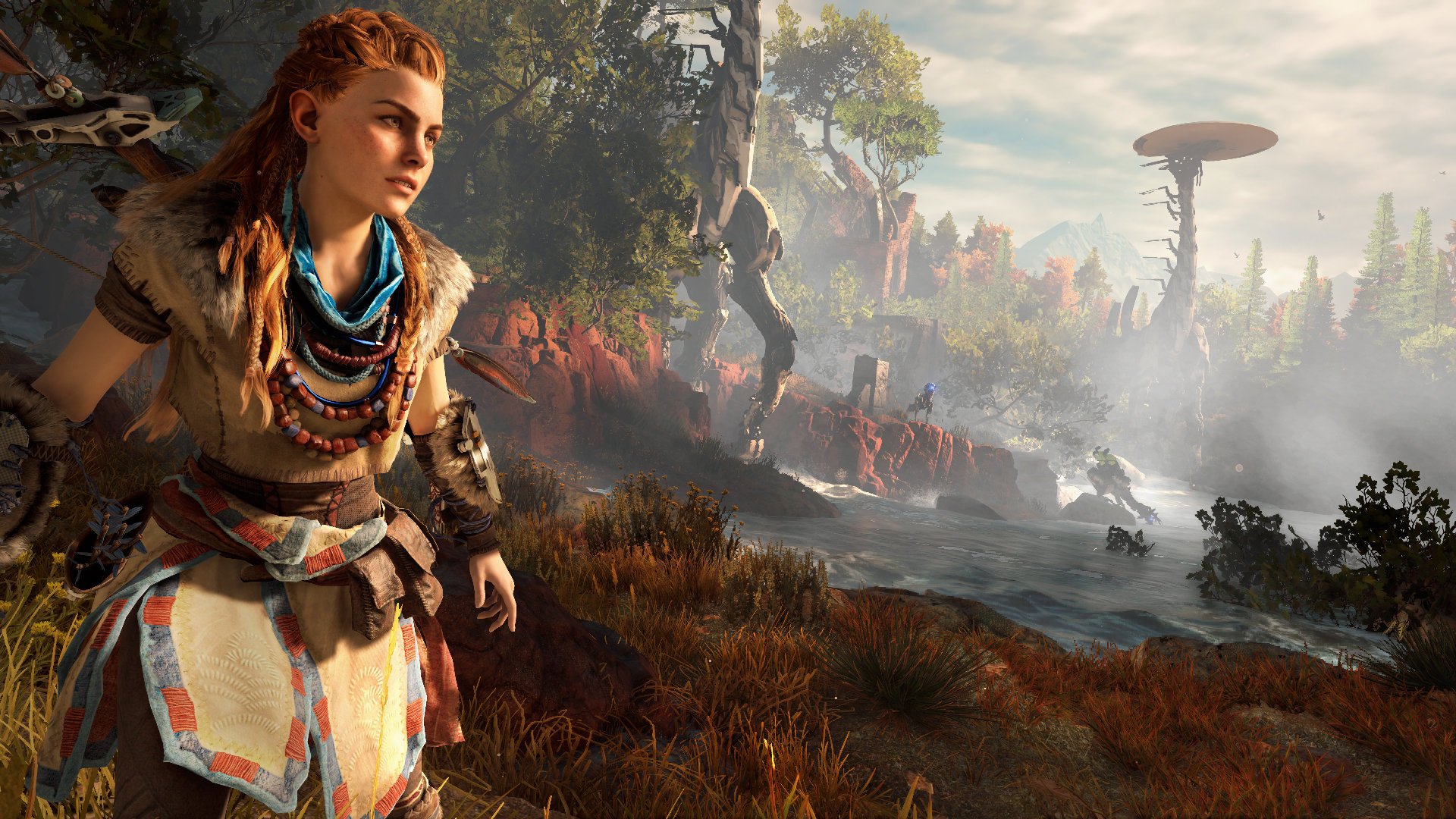 First hands-on with the new game from Guerrilla

I think there are some limitations to open-world games that not many things outside of Metal Gear Solid V: The Phantom Pain and its holistic systems have managed to get right. It seems like Guerrilla Games’ (Killzone) Horizon Zero Dawn has the right ideas, though. There are the trappings of open-world RPGs that can grate on me: quests and resources and side quests and enormous maps filled with little buttons and experience point-based skill progression.

But in talking with writer John Gonzalez and playing the game myself, I think Horizon may mitigate the repetitive tropes of the genre, partially on the strength of its world-building.

Horizon Zero Dawn stunned and surprised when it was announced last year at E3, partially because it came from a team known for dour, linear first-person shooters. “I can’t even think of a triple-A studio that’s taken this type of risk [in a wholesale shift in genre] since maybe the ’90s,” Gonzalez said. “They really pursued it fearlessly.” Gonzalez joined the project three years ago and it had been in pre-production for “a couple of years” prior.

One of the “huge influences for this game is BBC nature documentaries, these incredibly majestic portraits of planet earth and life on earth…A great deal of non-fiction went into the design,” from reading Futurist predictions to ecological journals.

“There may never have been a game where so many people on the team read Guns, Germs and Steel,” Gonzalez joked.

While the robotic wildlife looks damn cool, it’s not cool for cool’s sake. “Every machine has a purpose, even if the tribe doesn’t know what it is…Everything that’s in the game world has really been thought through.” Horizon boasts a complete, nature-inspired ecosystem with its robots, beyond the obvious, like the big-eyed Watchers that protect the bullish Broad Head herds. Those are the bovine beauts that protagonist Aloy “overrides” to turn into friendly mounts. Gonzalez hinted that, with the override ability leveled up enough, you might be able to hack and ride flying mounts. 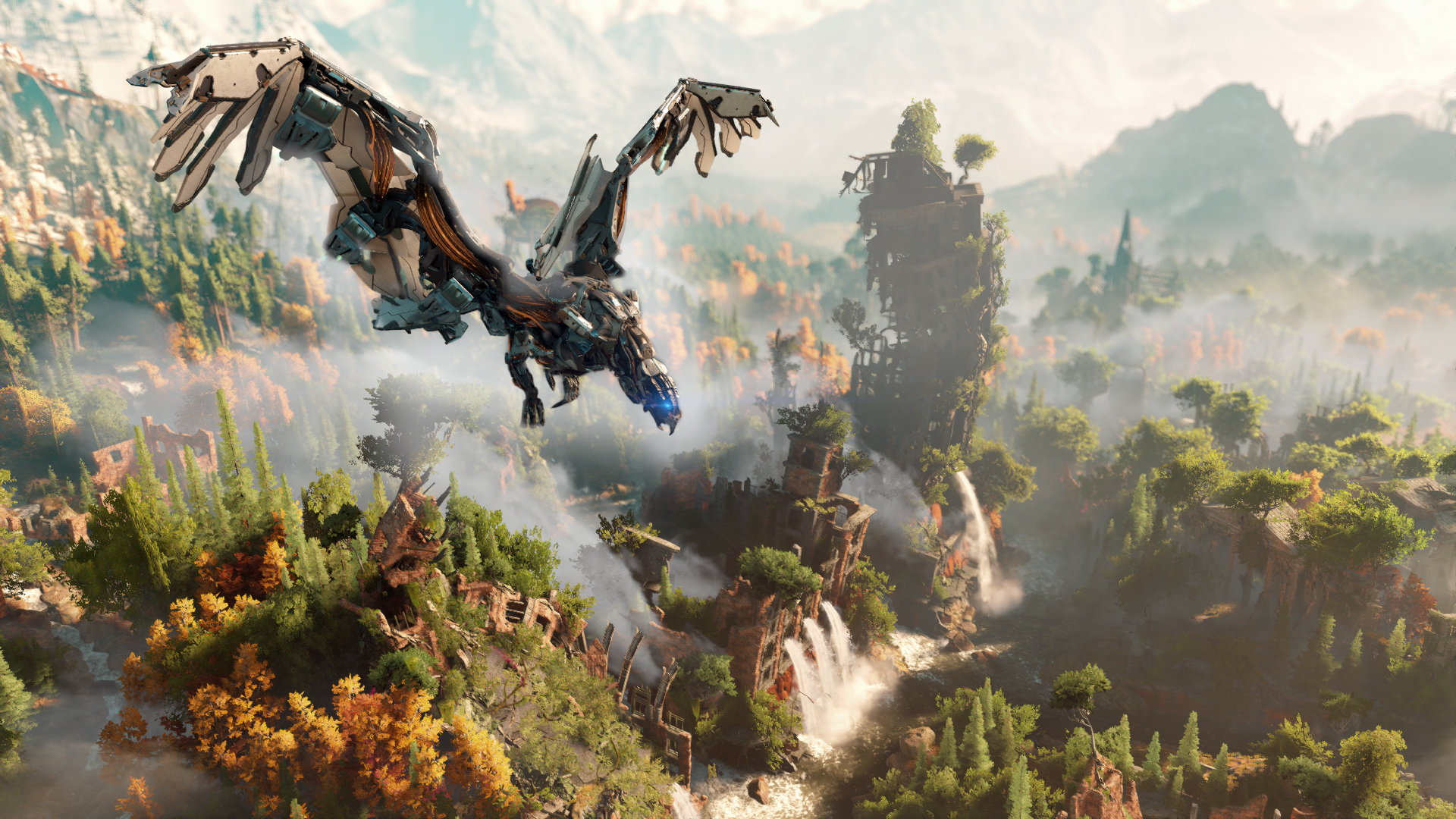 While I played a sort of sandbox setting made for E3, I first watched a live demo as Gonzalez went into the mystery of Horizon hinted at in the lengthy E3 trailer, the “personal quest [that] puts you on a collision course with the biggest mysteries and biggest dangers of this world.” Aloy is an outcast in her tribe, raised by a foster father. She doesn’t know her origins or her mother — a particular sticking point as, “within that tribe identity is really established in a matrilineal fashion.”

This bit of adversity has left Aloy agnostic to the religion of her people and an outsider in the community, which is why she doesn’t think “the Goddess” is going to cure the corruption that has started to infect the machines and cause them to go on berserk rampages. Gonzalez noted Ghibli’s Nausicaä of the Valley of the Wind and Princess Mononoke as obvious influences.

Aloy, ever the scrounger on the outskirts, has salvaged some ancient tech. Her Focus ability is a scanner that creates a dome of purple lights that highlight nearby robots and allows you to see their weakness as well as what resources they’re carrying so that, “if you’re looking for a specific resource, you don’t have to kill all the robots” haphazardly. It’s a cool digital effect, but doesn’t fall in a detective-mode trap of making the world hideous. Plus, Aloy can only crouch walk while it’s up, so you’re more likely to use it to tag a particular enemy or illuminate a patrol path and then get back to running around.

Towards the end of the developer demo, Aloy stumbles on a Corruptor, a new robot she’s never seen that looks like a four-legged scorpion and makes for a major encounter. 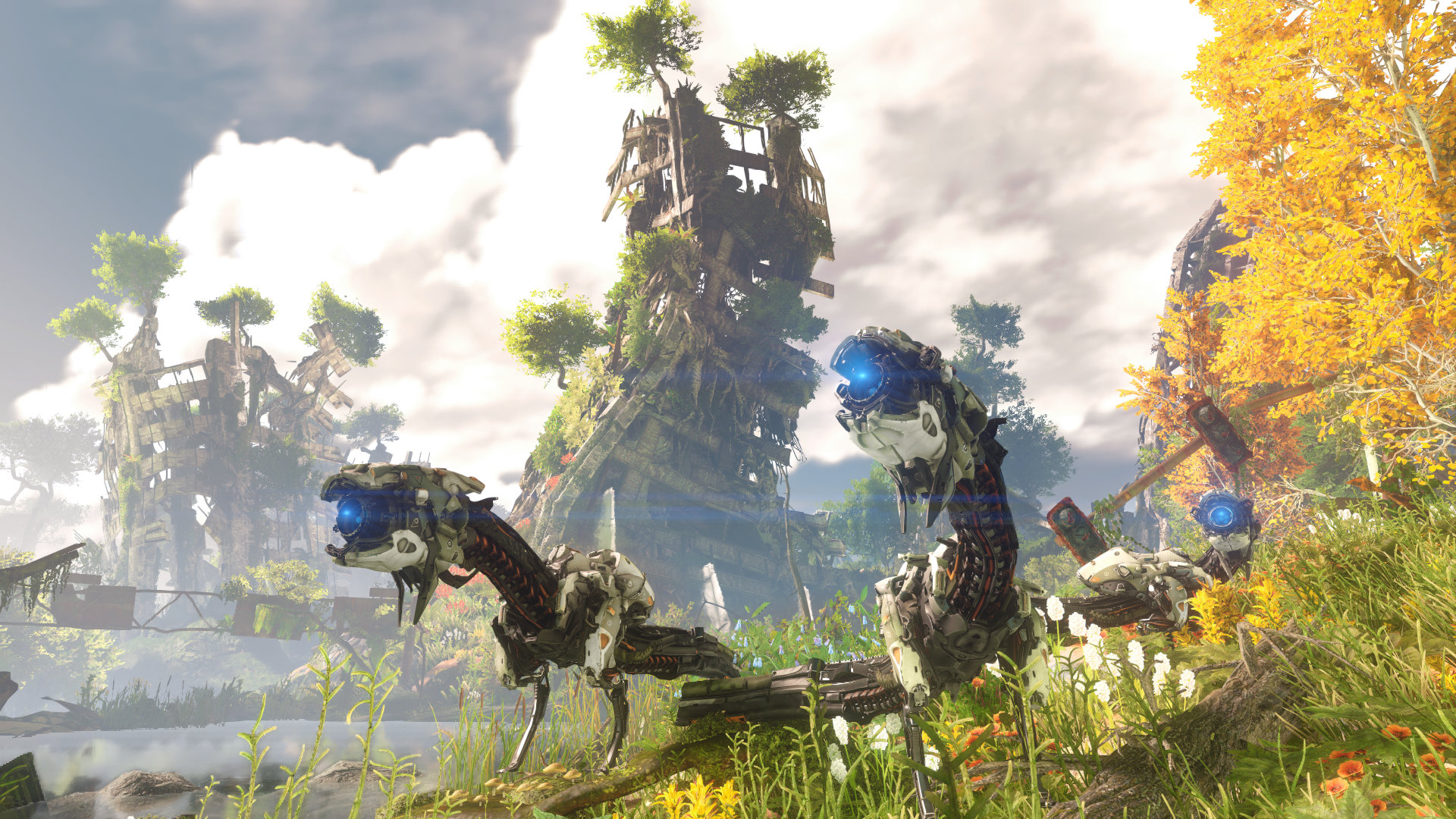 Actually playing Horizon for myself, I was still mad impressed by the brightly colored world and some of the smaller details. While riding the Broad Head, watching the robotic musculature in its haunches as it galloped was mesmerizing. I also ran into a Tachikoma-looking bot carrying a case on its back that you can knock off and loot. That the more complex robots have components you can knock off to hamper them proved a good gameplay addition, and after losing a straight up fight I remembered the rope harpoons Aloy can shoot to anchor an opponent in the ground.

What I was most impressed by was the fluidity, furthered by some impressive animation work. As I aimed arrows at an enemy on robot-back, Aloy naturally shifted side-saddle as my galloping bot rode too far past. It’s a real delight when it comes to the robots, though, which do move with impressive grace and idiosyncratic motion.

Some of the open-world staples seem a bit too standardized — wow do I love that Metal Gear Solid V‘s only skill tree is your own skill ceiling — but the thoughtful, detailed approach to the world may win me over yet. On the other hand, the hinted-at story notes, general aesthetic, and way Horizon Zero Dawn feels to play all have me completely on board. Oh, and in a Kojima “you will feel ashamed” moment, Gonzalez even promised that the title “will not sound like word soup” by the time you unravel Horizon‘s story. “You’ll be surprised by the emotional resonance.”

I hope so. And based on today, I’m willing to give it the benefit of the doubt.