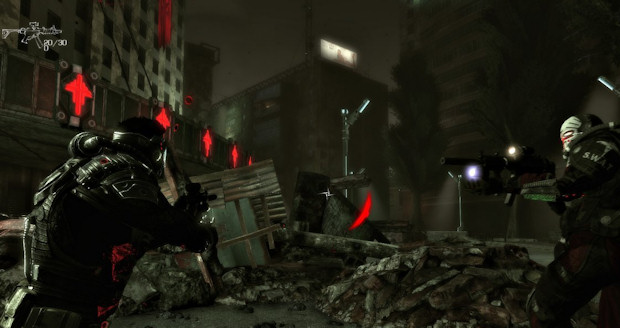 We don’t have enough videogames with pretentious, hard-to-pronounce titles, so here’s Topware and Black Wing Foundations with a brand new third-person-shooter for the Xbox 360 and PS3 that they’ve decided to call Scivelation. I’ve got that name copied onto my clipboard because there’s no way in Hell I’m spelling that correctly on the first try.

Looks like it might be quite cool, if somewhat generic. We’ll be keeping an eye on this and see what develops. In the meantime, hit the jump for TopWare’s press release, where the game details are divulged, and hit that link for the first screenshots.

“Scivelation will transform the Third-Person Shooter genre into an unrelenting interactive experience, hurling the player into a blockbuster journey, steeped in conflict and veiled in uncertainty.”

“Set in the distant future, Scivelation’s universe is a world born out of the ashes of conflict and misery. An oppressive global dictatorship, known as the Regime, has risen to power after the aftermath of the Apocalypse; aggressively seeking out and eliminating any opposition to their tyrannical government. With this capricious, dystopian reality as a backdrop, the player will take his or her place amongst the ranks of the resistance, waging war throughout the furthest reaches of the globe in this action-packed battle for freedom and survival.”