Step your pantsu game up senpai

OK so there is one last game from Tokyo Game Show I wanted to talk about. It’s an odd one you may have heard of by now, and assuming you read the title to this article, you should have a good idea of what the game is about. Yep, in the recently announced School Girl Zombie Hunter you play as Japanese school girls, and you hunt zombies.

Someone realized that there wasn’t enough zombies games, and his friend must have been at the same time thinking there aren’t enough lewd school girl games out there (in Japan, anyway). So they said “Hey, let’s put them together! Brilliant!” You’ll see below I had to suffer the chair of shame and nearly breaking my neck to judge this game for you.

Judge it as a game that is. Japan does not have the same ideas of sexualization or “objectification” that you might have in the west. Unlike some writers at other sites, I will not preach to you or the developers about what to think or feel. If this is up your alley, go play it, but only if you are 17 years or older as this game received a D rating for 17+ from CERO, the Japanese version of ESRB.

That said, let’s be frank and look it in the eye: there are two main draws to this game: zombie shootan’ and watching cute anime girls get stripped to their undies. I have no qualms against either, but this game isn’t so hot in either camp.

School Girl Zombie Hunter is set in the world of Onechanbara and you play as five high school girls trying to survive the apocalypse. The game is mission-based and takes place primarily on the school grounds. There are 50 missions. 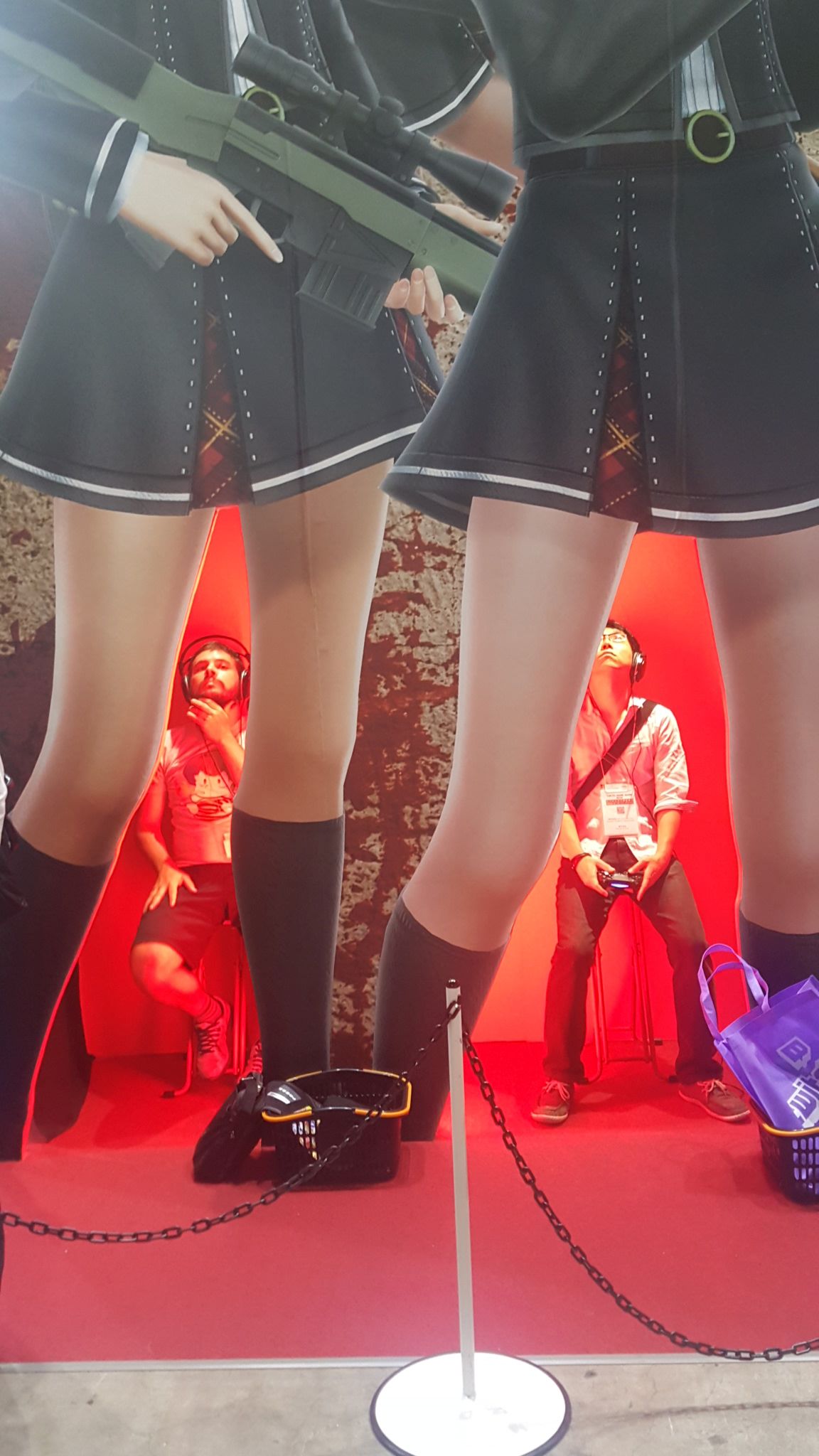 After a cutscene that can be skipped by pressing literally any button (the only game at TGS that did not prevent accidental cutscene-skipping nor allowed cutscene-pausing), you are dropped into the school with zombies already on the prowl for underage Japanese girl blood. Blood that can have its color changed to green or pink or whatever suits your fancy in the settings menu (affects both enemies and allies). The camera and other basic controls work as you would imagine. You are in third-person, obviously — how else would you see up their skirts? When you aim down the sights, it zooms in to a closer over-the-shoulder point of view, but it doesn’t help all that much.

This game reminded me why console shooters typically have some degree of auto-aim. I generally can hold my own in shooters, but I could not for the life of me get the reticle on a zombie crown. So I ended up just spraying, which seemed to be fine as there is seemingly infinite ammunition. Not only that, but at least on normal difficulty, the zombies are no threat at all. 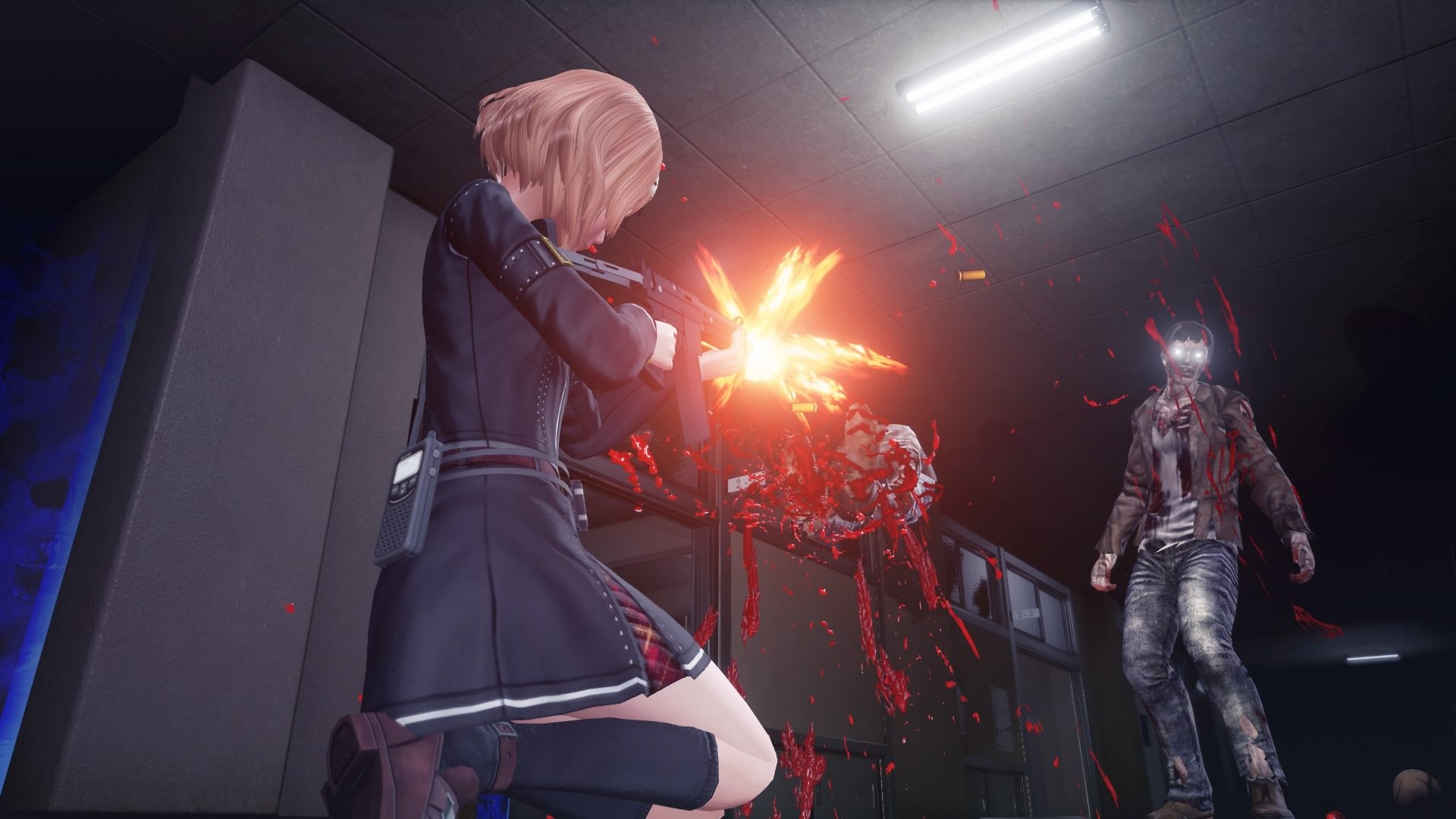 Zombies are slow in both movement and attack. If there were not invisible walls or the need to clear the enemies to proceed, you could just sprint to the finish unharmed. Even when they do land an attack on you, it does effectively no damage. Nearing the end of my time with the game, I spent a few minutes trying to die by running into hordes of zombies and priming myself for the incoming–let’s not go there. Anyway, I took no substantial damage at all, and unfortunately I had an AI teammate who continued to pick them off in one shot each. There is no friendly fire. I tried!

That’s pretty much all there is to say for the gameplay. The levels are like Tartarus levels in Persona 3 if those were even more simple and bland, and the zombie designs themselves are uninspired. Speaking of which, it really doesn’t need to be said but for the sake of thoroughness, let me say although you may have a horror-ble time playing it (no applause, please), this is not at all a horror game: these zombies aren’t scary. Without substantial gameplay, it’s obvious the main draw here is the sexual part. It’s Tamsoft, maker of Onechanbara, Hyperdimension Neptunia, and Senran Kagura. What did you expect? 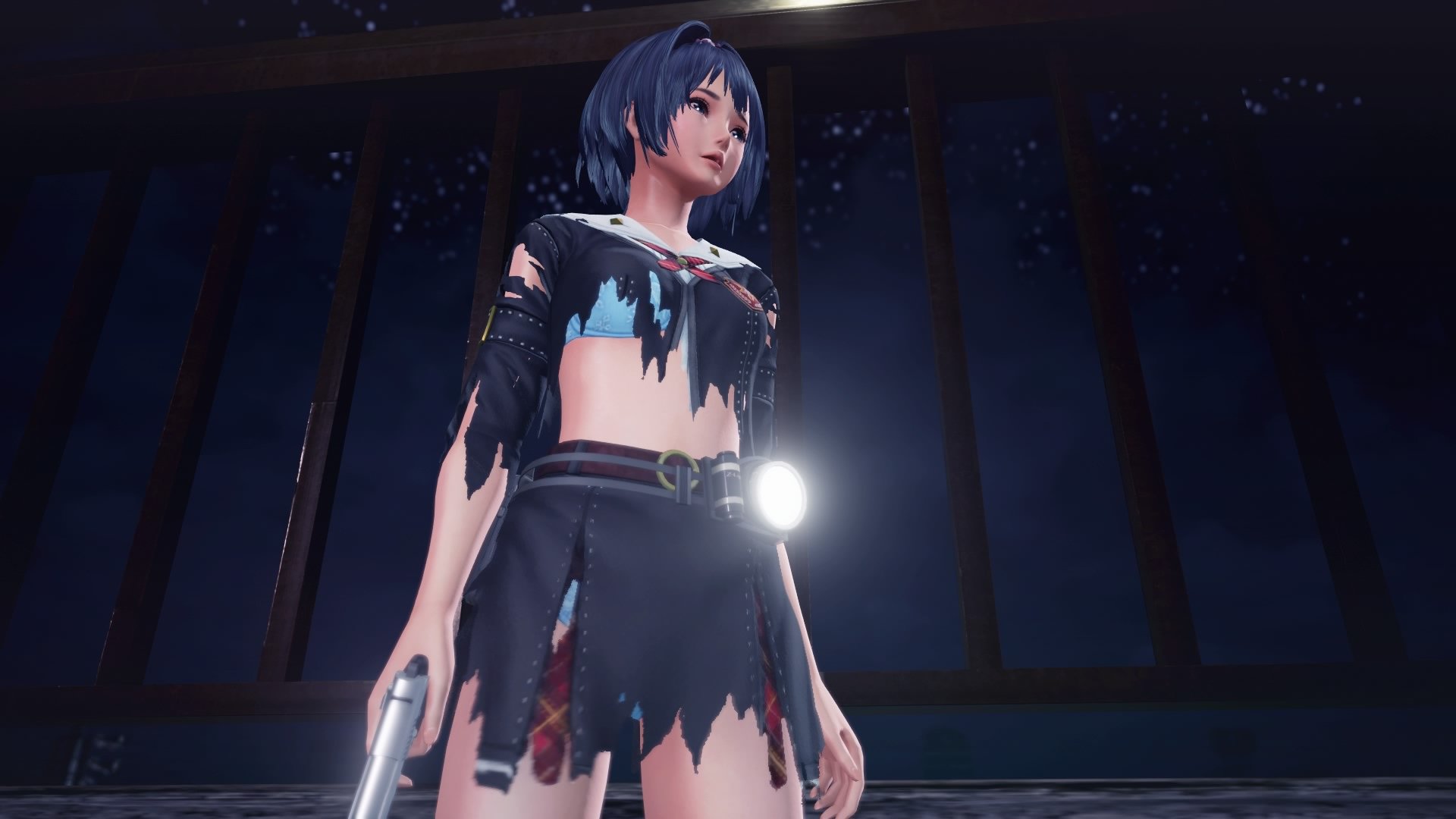 So, the big feature they want you to know about is that as you take damage your clothes will wear, tear, and eventually fall off. Targeted areas tear more, even if your health bar isn’t particularly affected.

Actually, despite taking damage on purpose, I’m sad to say I didn’t see this in action, so I cannot comment on how gradual it is. Considering the number of hits I took without damage, I imagine it must take a while. So if you just want to hurry up and get your anime girl down to her lacy unmentionables, you can just press the touchpad and presto! Anime undies.

The bonus is apparently the zombies react to this and this action can be used as a distraction. Making a statement of some sort, eh Tamsoft? If you want quicker access to the button, you can reassign it to X or whichever you prefer: you can remap every button. 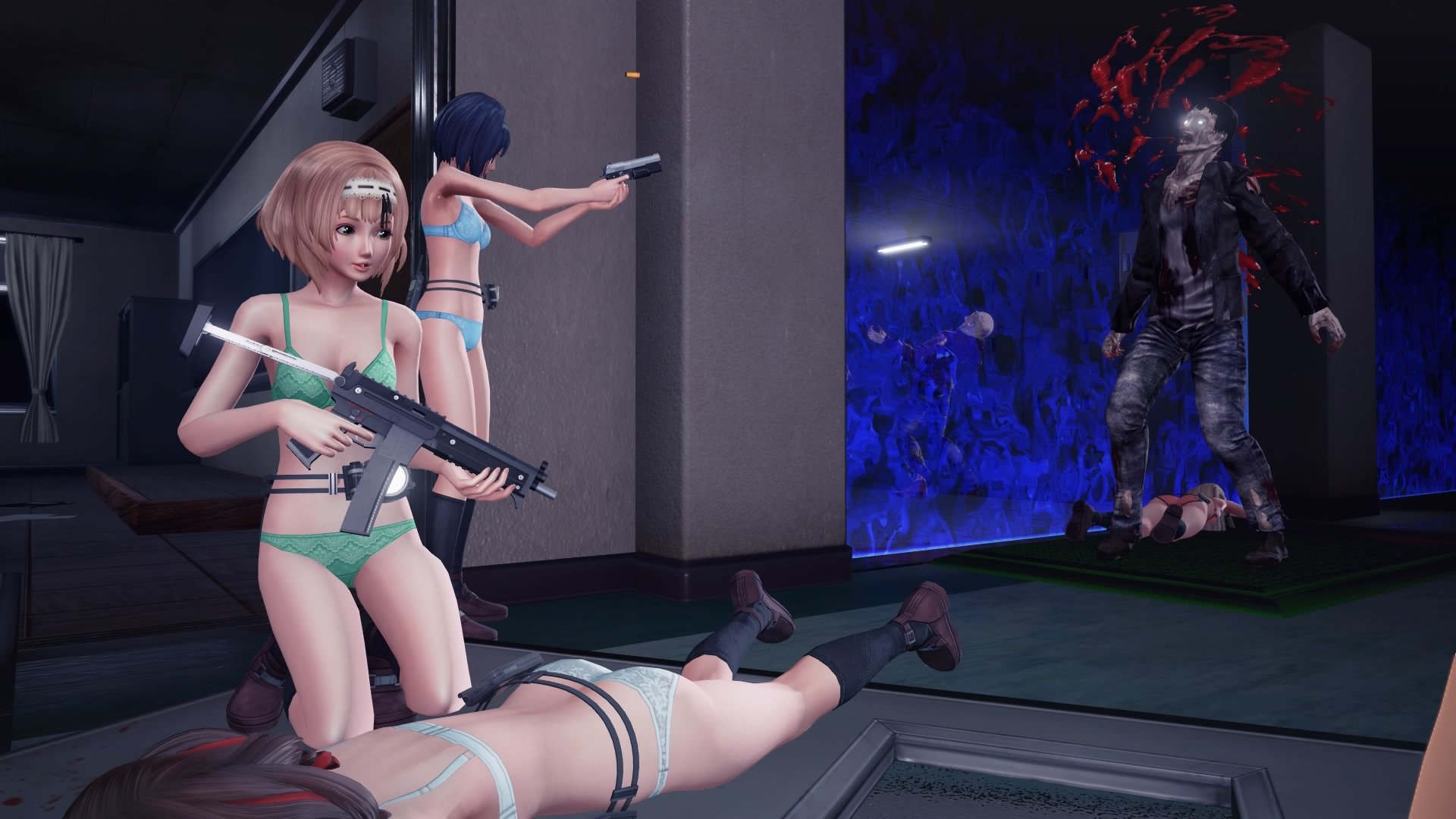 Your AI partner, when you have one, isn’t about to let you flaunt all by yourself. When you hit the remove-clothes button, all the clothes are coming off, for everyone. In case you are wondering, there is no stripping animation, the clothes just magically vanish. As far as gameplay is concerned, there did not appear to be any difference with or without the clothes. If you take more damage with no clothes on, it was not apparent to me. 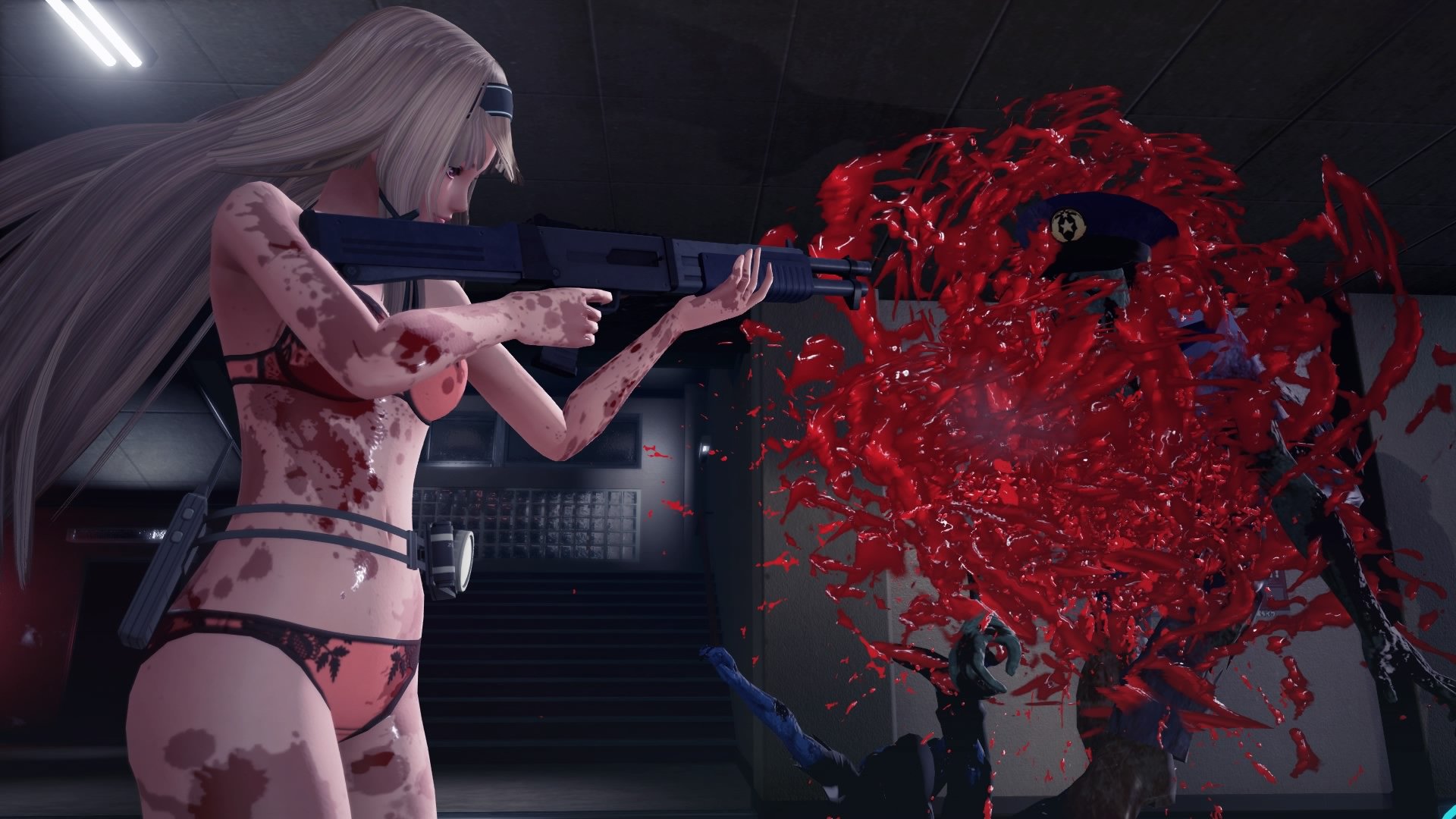 There were two levels to play and I played as the same girl. In both, she was wearing the same clothes, both on top and underneath, which models imitated on stage while I wasn’t around.

It seems obvious such a game would have various costumes and clothing options to select or even unlock, but considering the model’s recreation of the character and the same clothes being worn in two levels, there is room for doubt. In any case, this simplistic anime style isn’t very appealing when talking about arousal, and if you really want to sell to people who buy it for this reason, they could at least have some animations or leave a bit to the imagination. 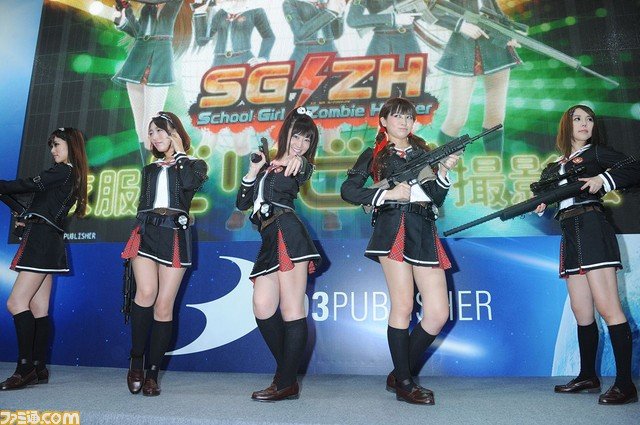 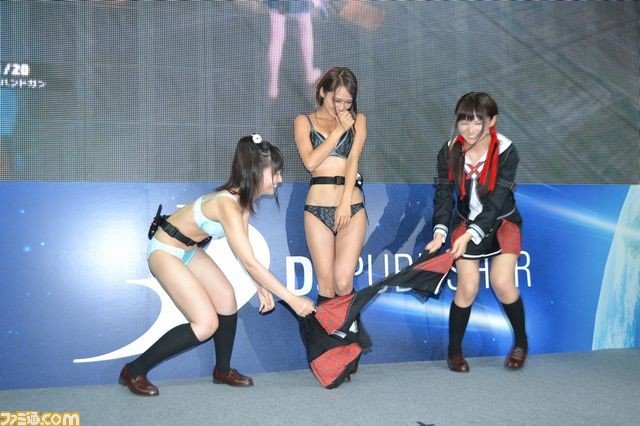 If you are looking for yet another zombie-slaying game, run far away. If you want a lewd game with cute girls in their undies, maybe you should play Dead or Alive instead.

Despite the fact I have no quarrels with such games, I can’t say I’m a connoisseur of Japanese schoolgirl underwear titles. This one releases in Japan on January 12, 2017 for 6,980 yen, which seems a bit steep for this sort of game (about US $68, the average price of a full game in Japan).