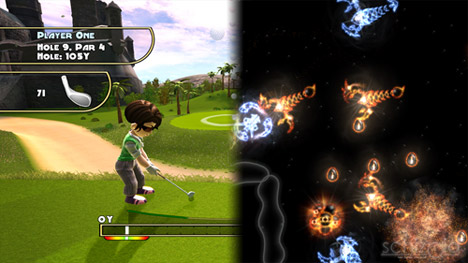 It’s been some time since Torpex Games announced that Schizoid (800 Microsoft Points) would be heading to Xbox LIVE Arcade as the first XNA Game Studio-built game to be up for purchase through the service, but it’s finally become a reality.

The focus of Schizoid is primarily that of co-op play. You and a friend will be able to take on wave after wave of enemies online and off. If you’d rather go the solo route, however, you have the option of playing with an AI-controlled partner or you can even control both ships by playing the “Uberschizoid” mode.

The second game bound for release on Wednesday is Golf: Tee It Up!, a game that’s gotten very little press and looks like a budget Hot Shots Golf. That might sound kind of harsh, but that’s what happens when you don’t market your game, people!

Finally, I’d like to remind you all that the Halo 3 map “Cold Storage” is out today for the fabulous price of free. It’s a remake of “Chill Out” from the original Halo, but you probably already knew that.

“Schizoid” is a fast and furiously paced action game with simple, intuitive gameplay.  Billed as “the most co-op game ever,” reflexes and smarts are key but sharp teamwork pays off even more!  Ram your way through waves of glowing enemies:  single player with an AI bot helper; or co-op multiplayer with two players offline or online through Xbox LIVE. “Schizoid” features over 120 challenging levels of mayhem that will appeal to casual and hardcore gamers alike. For the brave player, “Schizoid” offers the intense Uberschizoid game mode, in which a single player controls two different ships at the same time.

Developed by Torpex Games, “Schizoid” will be available worldwide for 800 Microsoft Points and is rated E for Everyone by the ESRB.

Pick up and play a few quick holes on your own or compete in a full 18-hole multiplayer tournament with friends in “Golf: Tee It Up!” Both beginners and experienced golfers can easily join the fun on beautiful, panoramic and challenging courses. With the unique Focus feature, you can read the green or control the ball’s spin in flight to achieve amazing precision!  “Golf: Tee It Up!” features zany, customizable characters and a variety of game modes including stroke, cup, or match play with local or Xbox LIVE multiplayer modes.

Developed by Housemarque and published by Activision, “Golf: Tee It Up!” will be available worldwide for 800 Microsoft Points and is rated E for Everyone by the ESRB.

For more details on “Golf: Tee It Up!” please visit https://www.xbox.com/en-US/games/g/golfteeitupxboxlivearcade/.