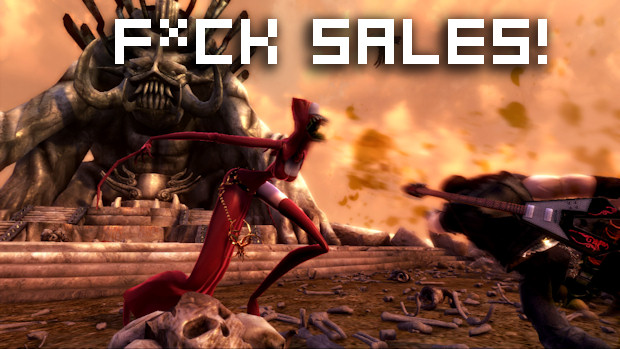 If anybody knows a thing or two about good games selling poorly, it’s Double Fine’s Tim Schafer. His last game, Psychonauts, was notorious for a disappointing sales performance despite widespread critical acclaim, but unlike the gamers who rage at such injustice, Schafer is taking it in his stride, not too worried at all.

“Fans worry too much about sales, to tell you the truth,” explains the designer, swallowing another chill pill. “As long as you make a cool game, publishers want to talk to you… [They say,] ‘We liked Psychonauts, and we think we could have sold it better.”

Backed by Jack Black, Brutal Legend looks to have a lot more mainstream potential than Psychonauts ever did, and Schafer is aware of that. He also swears that Brutal Legend‘s mainstream appeal was a creative decision, not influenced by marketing. Double Fine works to make each game radically different from the last, which is this one, in Schafer’s words, “is a game that natually has more commercial hooks, like hot babes and Jack Black.”

Brutal Legend is looking to be this year’s hot commodity among the hardcore elite, and we’re all looking forward to it here at Destructoid. Hopefully it sells far better than Psychonauts did, even if Schafer isn’t losing sleep over it.