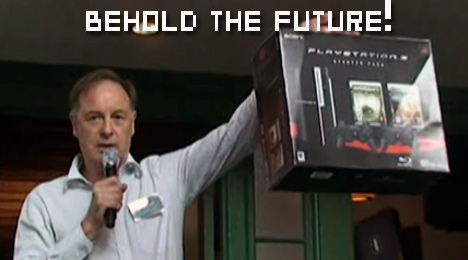 Citing internal statistics that show the PlayStation 3’s install base to be growing much faster than older brother PS2 (at a comparable snapshot in time), SCEE president David Reeves recently told those attending an undisclosed conference that Sony expects the Blu-ray beast to eclipse their previous ventures over the long haul. Not only that, but as far as he can see — there’s nothing but blue skies ahead for all:

“The next five years are going to be turbulent. But I think it is going to be the most exciting period that we have ever seen in the past ten years of video games”

In a surprise move, he even reserved a kind word or two for the “other guys” on the battlefield:

“We welcome all competition. Whatever happens, we are all going to do well. We should celebrate the growth of the industry.”

Now this is what you call subtle PR at its best. Acknowledge your competition in a positive light, all the while reminding people that your current hardware is still going to do what the previous ones did to them… just a little later than before. The only barrier to this, is that the competition is a lot stiffer than it used to be.