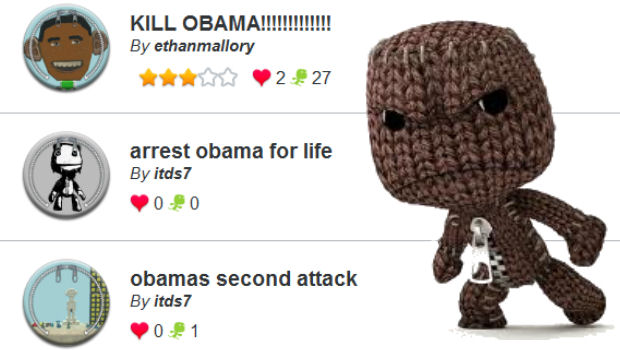 Hey guys, did you hear that Barack Obama is a bad president? He is such a bad president, actually! We should do something to assert our political beliefs and take a stand for what we believe in? How about we create a level in LittleBigPlanet 2 where we get to kill the president? THAT WILL SHOW HIM!

It’s always embarrassing when you get a bunch of repugnant teen gamers talking about politics, but LittleBigPlanet 2 has allowed these pimply pundits to express themselves in worryingly creepy ways. Quite a few Obama-themed levels are popping up in the game, with a variety of unsettling/stupid titles such as:

And it goes on like this. I’ve decided it’s now reasonable to assume that the emotionally unstable jerkoffs who whine over LittleBigPlanet 2 reviews are also extremist Tea Party Members. I have arrived at this conclusion using the science.

PS3: It only does impotent political rage!