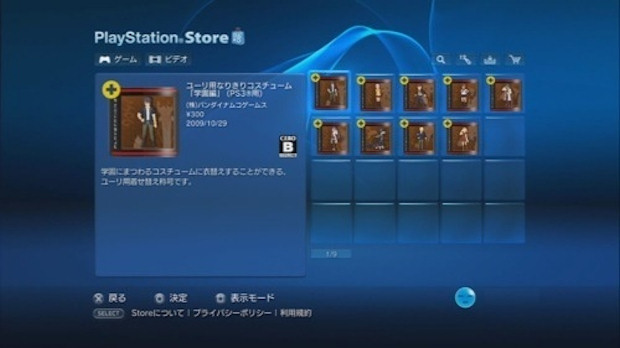 Oh Namco Bandai, is there any type of DLC that you won’t be ashamed to sell us? Tales of Vesperia is rocking the PS3 in Japan, and that means it’s time for Namco to do what Namco does best — try to sell lazy digital crap that only a moron could justify spending money on. Want to spend thirty bucks on fake clothes for RPG characters? Scamco has made it possible!

That’s right, folks! Namco Bandai has unleashed nine (APPARENTLY IT IS TWELVE, THANKS PARAPARAKING THE JOURNALIST!) downloadable character costumes on the Japanese PSN, costing ¥300 apiece. Add them all together, and you’re expected to pay ¥2,700, or $29.75, for a handful of pretend clothes that probably cost all of two bucks to make.

You almost have to admire Namco’s commitment to devaluing and whoring out every single game it publishes. Also, anybody who has bought this stuff is a dickhead.