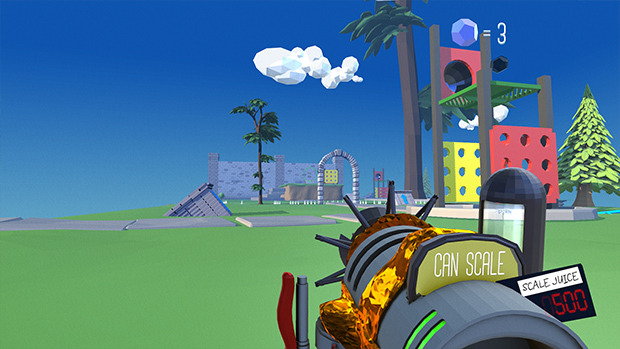 Last month, I had an opportunity to get some time in with SCALE, and it impressed me more than I expected. That’s saying quite a bit, considering the pitch alone got my hopes up: explore a colorful world and do some puzzle platforming with the help of a tool that lets you shrink or grow objects at will. Some of the ideas exhibited in that small slice of gameplay were extremely clever, and I’ve had my eyes on the title’s development since.

Today, developer Steve Swink launched a Kickstarter campaign for SCALE, with a goal of $87,000. After only a few hours into the month-long drive, the project has already raised more than $5,000. Backers who put up a little more than the minimum can also get the game’s original soundtrack, which is being composed and produced by FTL‘s Ben Prunty and Super Meat Boy‘s Danny Baranowsky. Voice talent for the game includes Sarah Elmaleh of Gone Home and Ashly Burch of Borderlands 2.

The first few stretch goals are pretty standard, with Oculus Rift support being added at $100,000 and a new animator added to the team at $50,000. What really excites me is the stretch goal for hitting $175,000: a level editor. I can only imagine what awesome stuff the community could come up with (once we get past the obligatory World 1-1, of course).