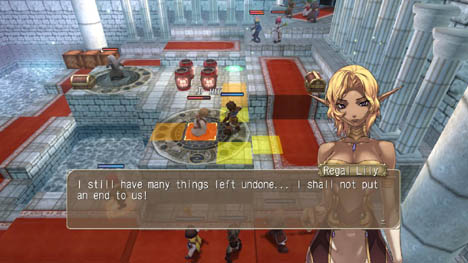 Atlus’ first Xbox 360 strategy RPG, Spectral Force 3 was originally supposed to be out… yesterday. They recently pushed it back to a summer release, and now they’re hoping this new bundle of screenshots will hold us over until then.

These new shots are still heavy on the animu and the big-headed heroes. That’s my thing, so I’m glad. Destructoid EiC Nick Chester is currently playing an early copy for an upcoming review. He says that he’s not so much of an SRPG guy, “but you fight skeletons and sh*t in the forest, so it’s all good.”

I’d still love to know more about this game, but Atlus only says “Spectral Force 3 is scheduled for release on July 29.” Nick wasn’t much help either.

What do you think of these screenshots? I think Regal Lily is kind of saucy.

There’s even more screenshots in this gallery.