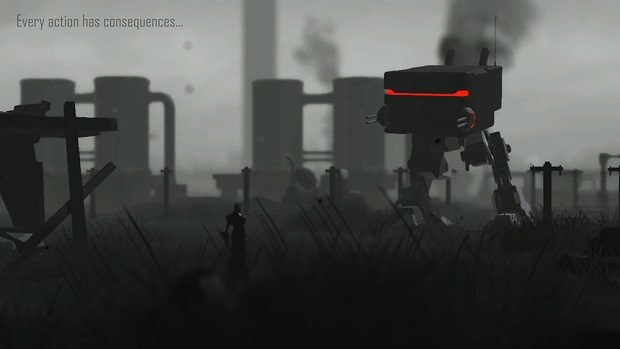 Romanian development studio Sand Sailor has recently taken to Kickstarter to fund its stealth-action platformer, Black The Fall. Inspired by the communist country they grew up in, the developers would like their game to impart on the player the experience of what it is like to exist in such a fearful and alienating society; where everyone you meet must be regarded as a potential enemy, an informer, or a criminal.

Black The Fall offers the player the choice: use violence and attempt to force your way through the dreary post-industrial wastes, or use stealth and avoid confrontations. Think twice before you squeeze that trigger — every action will have potential consequences. A reputation system is also in place, so how you interact with the populace will affect how the game plays out.

It looks stunning visually, bringing to mind the style popularized by indie darling LIMBO but to me it feels more palpable, less dreamlike in its presentation. The Natives and Machines seem far more threatening and oppressive than the shadowy figures that stalked you in Play Dead’s puzzle platformer. I found the hulking Sentinal particularly interesting. Perhaps in a nod to Kojima’s bipedal killing machines, its animal-like movements hint at an intelligence controlling the machine, something more reactive and calculating than a simple robot.

The game will come in two acts, the first of which is expected to be delivered this December, and the final installment should be out sometime in the first half of 2015. If the game looks familiar to you, there’s good reason for that. Originally, Sand Sailor had a rougher, earlier build available on Steam Early Access. For those of you who bought into this outmoded version of the game, don’t worry; you’ll be grandfathered in to the new Early Access program when it becomes available.

At the time of this writing, Black The Fall has raised £6,861 of its £25,000 goal with 29 days to go. If you’d like to learn more about the title, or would like to become a Backer make sure to check out the game’s Kickstarter page.